Has a top Chinese official defected to the US with Wuhan lab secrets? Rumors swirl vice minister of State Security fled Beijing in February with information that sparked Biden u-turn on COVID origins 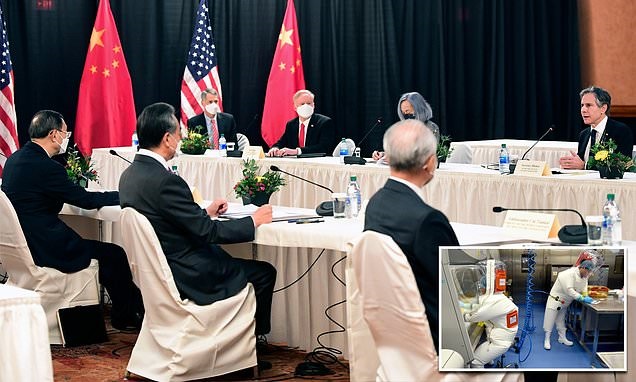 A high-ranking Chinese spy chief is rumoured to have defected to the United States and given Washington evidence on the Wuhan lab which prompted Joe Biden's about-face on the coronavirus leak theory.

Dong Jingwei is believed to have fled to the US with his daughter Dong Yang on February 10, according to Spy Talk.

He made a name in China's secret service, known as Guoanbu, and was head of counter-intelligence, or spy-catching, after being promoted to the post of vice minister in April 2018.

If the reports are true, Dong is the highest-level defector in the history of the People’s Republic of China.

It is claimed that he informed US officials about the Wuhan Institute of Virology, where Covid-19 may have emerged, causing Biden to look seriously at the lab leak theory - long-derided as an erroneous fascination of the Trump administration.

Dong has been pictured online, and though not all of the pictures match up, one that continues to crop up was posted by Dr Han Lianchao, a former Chinese foreign ministry official who defected after the 1989 Tiananmen Square massacre.

Han, described by US officials as a 'straight-shooter,' claims that Beijing dispatched envoys to meet with US Secretary of State Anthony Blinken in March to discuss handing Dong back to them.

Han claims the Communist Party's top brass demanded Dong be returned to them at the highly-contentious meeting in Alaska.

'Zhang was a confidant of Ma Jian, former MSS executive vice minister, who is also in prison for corruption.'

Dong 'was last seen in public in September 2020,' Han claimed.

His photos have been deleted by the Chinese search engine Baidu, according to some Chinese language news reports abroad.

Han's claim was impossible to verify, but he was known as 'a straight shooter, not known to exaggerate in any way or form, trusted for his integrity,' according to Nicholas Eftimiades, a former Pentagon, State Department and CIA expert.