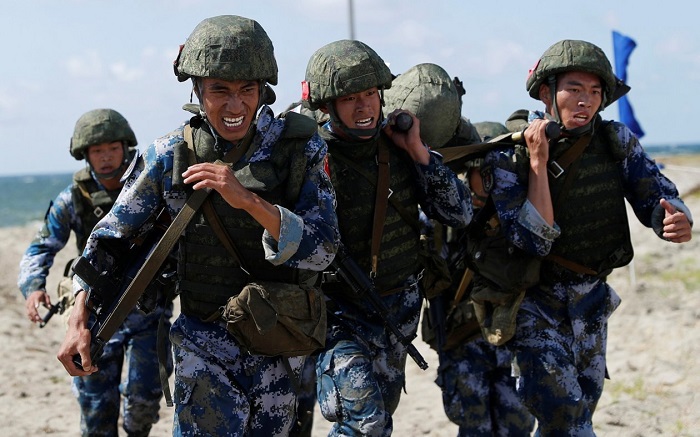 Chinese maritime strategy is a misnomer, methinks. It should be strategies, plural. China may harbor the same goals in, say, the East China Sea that it does in the South China Sea. Namely, it may aspire to wrest physical control—a.k.a. sovereignty—from its neighbors throughout a given expanse and the airspace overhead. The Chinese Communist Party’s word would become law. Others would obey.

The aggregate result, should these strategies work: de facto sovereignty for China within Asia’s first offshore island chain, backed up by the armed might of the People’s Liberation Army (PLA).

But Beijing is treading disparate pathways toward that end. Indeed, its approach in the East China Sea is a geospatial inverse of its approach in the South China Sea. Exhibit A: last month Chinese air-traffic controllers warned the crew of a U.S. Air Force B-1B bomber that the aircraft had entered “Chinese airspace” and should begone forthwith. In reality, the bomber was transiting China’s air-defense identification zone (ADIZ), declared to great fanfare back in 2013.

Coastal states commonly erect such zones to monitor air traffic heading toward their shores, but China’s ADIZ represents a thinly veiled grab for sovereignty over the airways. It’s an airborne counterpart to the “nine-dashed line” inscribed on China’s map of the South China Sea. Beijing claims the right to regulate not just flights bound for China, but any aircraft transiting the zone—even if well out to sea and parallel to the mainland coastline. It claims to regulate overflight over geographic features administered by other Asian governments, notably the Japan-administered Senkaku Islands.

And party spokesmen have taken to blurring the language they deploy to describe the ADIZ. They increasingly refer to it as territorial airspace, where foreign aircraft may pass only if they desist from all military activities. That’s entirely fitting in the airspace over China’s territorial sea, which extends twelve nautical miles offshore. Beyond the twelve-mile limit, however, no coastal state has the right to dictate what aircrews may or may not do. That’s the avian commons, a domain where virtually untrammeled freedom prevails.

The Obama administration and friendly governments thus rejected Beijing’s ADIZ unequivocally, and for good reason. China has a way of using wordplay to redefine and expand its political and strategic prerogatives. Defenders of the commons must debunk attempted sleights of hand early and often. The Trump administration appeared set to embrace the same approach as its predecessor. The U.S. Air Force aviators reminded the air-traffic controllers that they were conducting lawful operations in international airspace, seventy miles offshore. They refused to deviate from their flight path.

Good. Assent to China’s demands for the sake of comity, and creeping encroachment will proceed on the surface beneath. If airspace belongs to China, so must the sea and land below. QED. Rebuff China’s demands aloft, and it will have a hard time redefining its ADIZ as national territory. The sea below will remain a commons as well.

As noted before, China’s South China Sea strategy is an upside-down cousin to its East China Sea strategy: Beijing started by claiming the sea and its archipelagos, and projected its supposed jurisdiction skyward. If the sea is part of Greater China, goes the logic, then so is the wild blue yonder above. That’s why party officialdom uses the language of “innocent passage” for the South China Sea commons. It insists that foreign ships and aircraft forswear all military activities there—the way they must within coastal states’ territorial waters.

Why the disparity between strategies? Why not replicate the proven Southeast Asian approach to the north? First of all, there’s expediency. Chinese diplomats can point to the map to justify their claim to South China Sea waters and islands. To the 1947 map, that is, that bears a nine-dashed line enclosing waters that have supposedly belonged to China since remote antiquity. That’s an image with long provenance, and something to sustain a diplomatic campaign.

Second, the East China Sea is simply a less hospitable theater for Chinese strategy compared to the South China Sea. The South China Sea is a long, distended body of water dotted with islands, atolls and reefs. Except for China, weak coastal states form its rim. Unless Southeast Asian states make common cause—as they seldom do—Beijing will command a forbidding advantage in any contest for control of regional islands, sea or air.

If the South China Sea offers relatively permissive surroundings, the East China Sea is uninviting. It is compact by contrast to the South China Sea. Strong military powers hostile to Chinese territorial aggrandizement comprise its eastern rim. Among these potential foes, Taiwan is unofficially allied with the United States. Japan is formally allied with the United States, and indeed, its world-class navy operates as part of a combined fleet alongside the U.S. Seventh Fleet.

In short, little territory remains for Beijing to prise loose in the East China Sea. What islands there are belong to powerful antagonists backed by the predominant naval power of the age. Small wonder that China’s coast guard, maritime militia and navy have confined themselves to harrying Japanese forces policing the sea around the Senkakus. And small wonder Beijing started staking its claims with an ADIZ. Declaring such a zone represented one among a lean menu of options.

In his last major work, titled Naval Strategy (1911), historian Alfred Thayer Mahan hinted at the differences between Southeast and Northeast Asia today. Notes Mahan, regions that are “rich by nature and important both commercially and politically, but politically insecure, compel the attention and excite the jealousies of more powerful nations.” Southeast Asia is a quintessential economically vibrant yet weak and disunited region. It makes an ideal setting for a jealous, united China that wants to rewrite the rules of the regional order.

To Chinese eyes, by contrast, Northeast Asia is a prosperous theater, occupied by an antagonist boasting the world’s third-largest economy, allied to a superpower boasting the world’s largest economy. This is a tough neighborhood for would-be hegemons in Beijing. Badgering others to acquiesce in its air-defense zone may be the most China can do unless the military balance comes to favor China so lopsidedly that it can entertain new options.

Will Beijing’s air-first strategy work? Doubtful. China has achieved a measure of success in Southeast Asia because the sea lends itself to “gray-zone” tactics prosecuted by paramilitary and nonmilitary implements of sea power. Maritime militiamen operating within the fishing fleet—and backed by the China Coast Guard—can overwhelm regional coast guards and navies. The surface-first approach lends itself to gray-zone tactics.

Not so aviation. The nature of air and sea traffic is just different. Fishing or coast-guard craft can obstruct passage by foreign fishing boats, coast-guard cutters, or even warships. Block a slow-moving ship’s path and it stops or turns away. The burden of deciding whether to escalate or capitulate falls on the victim of Chinese gray-zone tactics—and Beijing gets to play the aggrieved party if the victim chooses escalation.

Yet there’s no obvious aerial equivalent to China’s swarm of fishing craft. Military aircraft operating under ground control constitute the airborne arm of China’s offshore strategy. Intercepting and blocking the movements of foreign aircraft is dicey compared to playing chicken down on the surface. Collision and death are far more likely, the diplomatic repercussions unpalatable in the extreme. Nor can officialdom distance itself from what PLA pilots do the way it can from maritime militiamen.

One doubts Beijing relishes a repeat of the 2001 EP-3 incident, when a Chinese fighter was hotdogging near a U.S. surveillance plane over the South China Sea, collided with the American plane and set loose a diplomatic ruckus. It certainly doesn’t relish lots of repeats. And yet such would be a foreseeable outcome of sending planes to operate routinely in close proximity to foreign aircraft. The burden would fall on China—not China’s opponents—to justify its behavior. Beijing would have painted itself as the aggressor.

The upshot? The U.S.-Japan alliance should remain confident and united while shoring up its side of the military balance. If the allies do, they will expose China’s ADIZ as hollow—and keep China from exploiting it to seek bigger things.