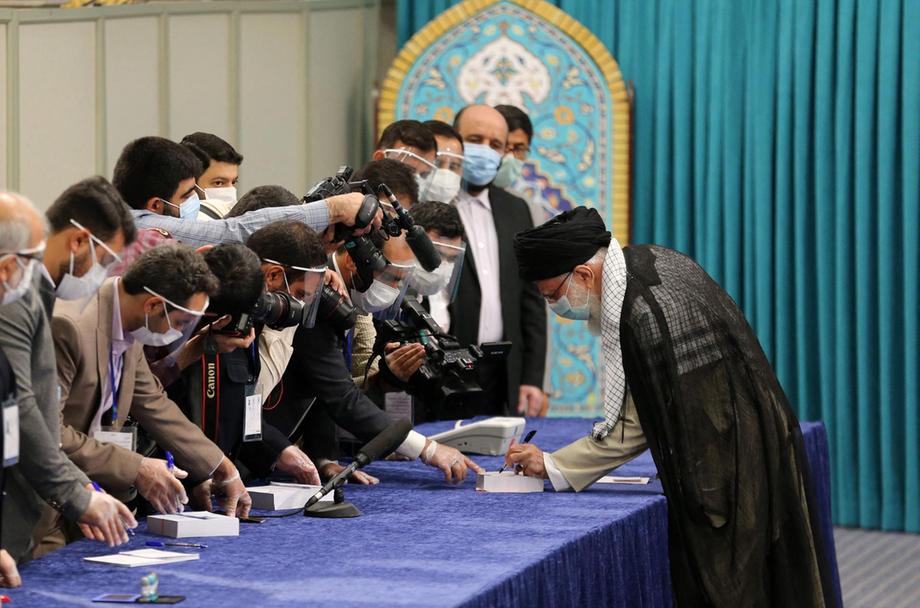 Iran's supreme leader Ayatollah Ali Khamenei is greeted by electoral workers as he arrives to cast his ballot in the Islamic republic's presidential election. AFP

Polls closed in Iran's presidential election after 19 hours of voting, with results expected as early as midday Saturday.

Just over 12 hours into voting, nationwide turnout had reached 37 per cent, the Fars news agency reported, as overseas Iranians also cast their ballots in Iraq, Kuwait, Lebanon and elsewhere.

Supreme Leader Ayatollah Ali Khamenei cast the ceremonial first ballot after polls opened at 7am and urged people to come out and choose from the limited field of candidates that sparked public anger and calls for an election boycott.

Mr Khamenei's hard-line protege, judiciary chief Ebrahim Raisi, is tipped to beat the three other candidates left in the race after three others withdrew in the past week.

"Each vote counts ... come and vote and choose your president ... this is important for the future of your country," Mr Khamenei said after casting his vote in the capital Tehran.

After a two-hour extension following calls from some media and the campaigns of candidates, voting officially closed at 2am on Saturday.

Results are expected as early as noon on Saturday.

If no clear winner emerges, a runoff will be held on June 25, defying predictions.

Pre-election polling by the Iranian Students Polling Agency found only 40 per cent of the 59.3 million eligible Iranians intended to vote.

No presidential race since the republic was founded in 1979 has had a turnout below 50 per cent.

The elections faced early difficulties, with reports of malfunctioning electronic voting machines at some polling locations in Tehran and other places across the country, and a shortage of paper ballots at others.