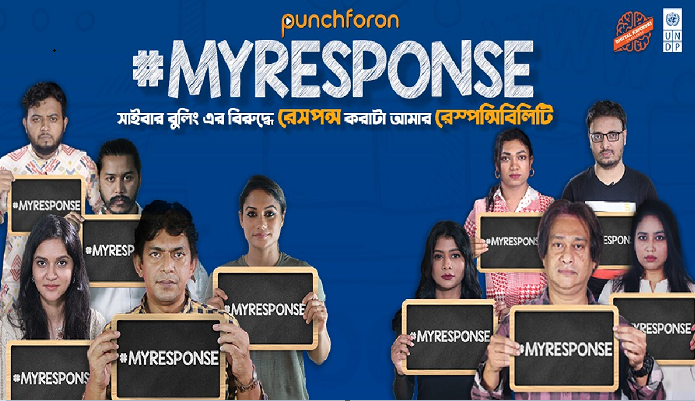 The United Nations Development Programme (UNDP) has teamed up with Puncforon, the winner of its Digital Khichuri Challenge 2020, to launch the "#MyResponse" campaign to raise awareness against online harassment on "Stop Cyberbullying Day."

UNDP, under its "Partnerships for a Tolerant and Inclusive Bangladesh (PTIB)" project, has been working with the government and other partners to improve the digital literacy of youths and prevent violent extremism.

"MyResponse'' campaign is an initiative of UNDP and Puncforon to contain the rising trend of cyber harassment, said the UNDP Friday.

Under this campaign, noted personalities urged everyone to end cyberbullying in Bangladesh.

"We have to break the silence because cyber offenders get away with the crime when there is no protest. It is time to act together against all forms of cyberbullying," said actor Chanchal Chowdhury.

UNGDP encouraged the online communities to speak up against cyberbullying with the hashtag #MyResponse.

Social networks have become a major space for cyberbullying and online harassment, especially against women, girls and minorities, said the UNDP.

The country has a high rate of cyberbullying and 80% of the victims are girls and women aged 14-22. A significant majority of cybercriminals and hackers fall between the age range of 16-17, according to the Cyber Crime Division of Dhaka Metropolitan Police.

The risk can be reduced if internet users can be made more informed. Particularly, children and adolescents should be sensitised on the dos and don'ts of the internet, the experts say.