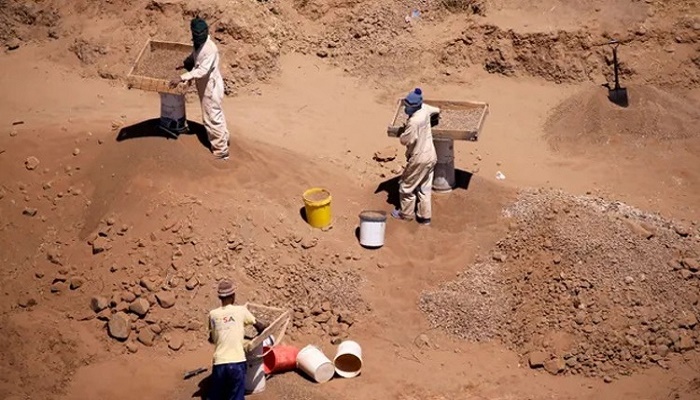 Police in South Africa have discovered the bodies of 20 suspected illegal miners near an abandoned goldmine shaft near Johannesburg.

Police said in a statement they were investigating the cause of the deaths, adding that the men’s bodies “were found wrapped in white plastic bags” and bore “severe body burns”.

“All the deceased are suspected to be illegal miners commonly known as ‘zama zamas’ operating in obsolete shafts in Orkney and Stilfontein,” just under 200km south-west of Johannesburg, police said in the statement.

Thousands of “zama zamas” – which means “those who try their luck” in Zulu - operate in the country, according to the South African Human Rights Commission (SAHRC). Most are in Johannesburg, South Africa’s commercial capital, which is built on some of the world’s richest gold deposits.

The first five bodies were discovered on Monday and 15 more on Tuesday, police spokesman Brigadier Sabata Mokgwabone told AFP on Wednesday. The first group was found outside a disused mine shaft, local media reported. Fourteen more “decomposed bodies were found along Ariston Road near the railway line,” Mr Mokgwabone told the Sunday Times.

Most illegal mining is run by crime syndicates. A 2018 report by the Global Initiative Against Transnational Organized Crime estimated that it costs South Africa more than GB£753 million a year. The practice is extremely dangerous, with the risk of injuries and deaths from explosives, toxic fume inhalation, collapsing mine shafts and gang violence.

Between 2012 and 2015 more than 300 miners working informally in illegal mines are estimated to have died. There are 6,000 “derelict and ownerless” mines managed by South Africa’s Department of Mineral Resources, local media reported.

Informal mining is not restricted to abandoned mines. In 2009, at least 82 men – thought to have been illegal miners – died after an underground fire at an active mine owned by Harmony Gold.

The SAHRC estimates that informal mining involved as many as 30,000 people in the decade to 2015. Some miners may spend as long as six months underground, the Guardian reported in 2019, “sustained by makeshift underground villages where basic foodstuffs, airtime, alcohol and even sex are sold at dramatically inflated prices”.

South African police have opened an inquest into the 20 recent deaths.