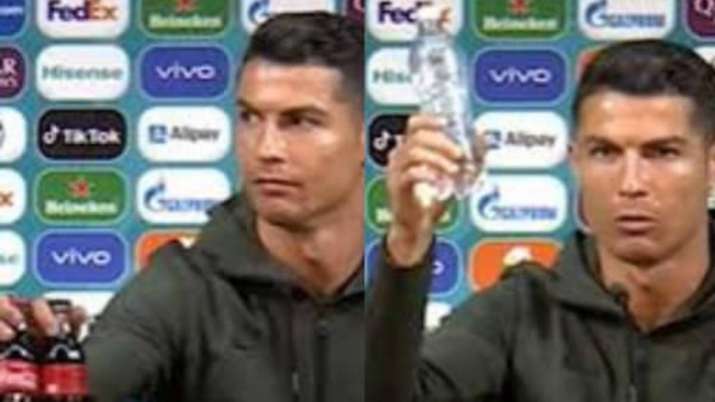 Cristiano Ronaldo's removal of Coca Cola bottles at a Euro 2020 press conference on Monday was followed by $4 billion being knocked off the company's market value.

Ronaldo was speaking at a press conference ahead of Portugal's game against Hungary on Monday when the soft drinks were placed in front of his seat. The 36-year-old removed them from view and said that people should 'drink water' instead.

The gesture coincided with a significant impact on Coca Cola's market value.

Coca Cola's shares were worth $56.1 each when the market opened in Europe on Monday.

But by the end of the press conference, they had fallen to $55.2 each.

That is a 1.6 per cent drop in share price, which means a $4 billion loss in market value.

How did Coca Cola respond to Ronaldo's comments?

Coca Cola responded to the initial comments by saying "everyone is entitled to their drink preferences" and that everyone has different "tastes and needs".

A spokesperson added: "Players are offered water, alongside Coca-Cola and Coca-Cola Zero Sugar, on arrival at our press conferences."

Why would Ronaldo dislike sugary drinks?

The veteran has an incredibly strict diet and is known to avoid sugary foods.

Ronaldo is thought to eat up to six clean meals a day to help maintain his incredible physique.