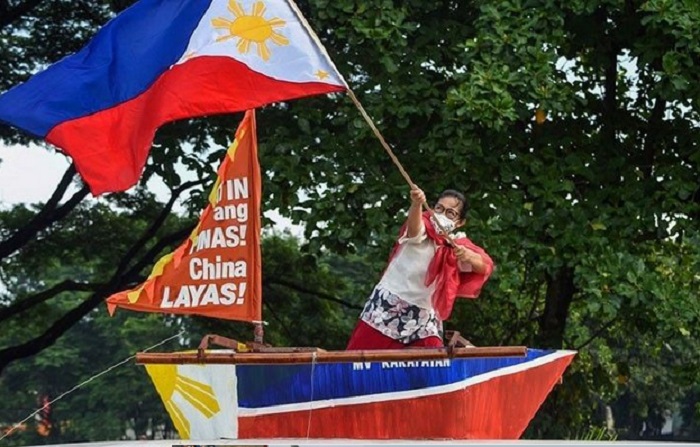 MANILA, Philippines — Administration critics and militants marked yesterday the 123rd anniversary of the country’s independence from Spain with protest marches, motorcade and a fluvial parade – with participants denouncing China’s provocations in the West Philippine Sea and calling on Filipinos not to let another Duterte or any administration followers get elected in 2022.

Detained Sen. Leila de Lima, in a message read for her by Kabataan Partylist Rep. Sarah Elago, said the people would be “taking back what is rightfully ours by ensuring that no Duterte or any of your ilk will ever set foot in Malacañang again.”

She said President Duterte would be leaving “a nation of orphans and a generation of beggars living on crumbs from China’s banquet” after his term ends in 2022.

Contrary to his appeal to Filipinos to “preserve our sovereignty in honor of our heroes” in his first Independence Day message, Duterte is now talking about a “win-win cooperation with China for greater peace, progress and prosperity,” De Lima said.

“Now that’s rubbish; not our historic legal victory in our arbitration case against China on the West Philippine Sea,” she said in Filipino, referring to the President’s declaring recently that the 2016 arbitral award was just a piece of paper that could be thrown in a waste basket.

Fishermen, led by Pamalakaya, held an Independence Day rally on the coast of Botolan in Zambales to protest China’s incursions in Philippine waters.

At a rally outside the Chinese embassy’s consular office on Sen. Gil Puyat Avenue in Makati City, Bayan Muna secretary general Renato Reyes Jr. called on the people to shun politicians who would “sell our territory to foreigners, give up the West Philippine Sea and be an aspirant for the presidency in the 2022 elections.”