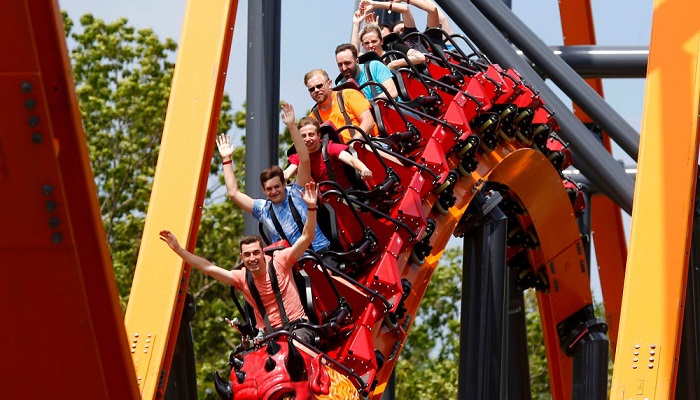 Riders are at the top of a 130-foot drop. They're about to plunge almost 60 mph. Now's a good time to ask: "What in the devil are they thinking?"

These coaster enthusiasts -- "daredevils" if you will -- are willing riders on the Jersey Devil Coaster, which debuted to the public on Sunday, June 13, at Six Flags Great Adventure in central New Jersey.

First drop is a real doozy
Six Flags has posted a 1:11 minute video of the ride on its Twitter account.

The ride is a "singular" experience. Unlike most coasters where you share the ride side-by-side, folks on the Jersey Devil are seated low and in single file. Each train holds 12 passengers.

The Devil means business, too. Straight out of the station, the coaster immediately begins its rapid ascent. It crests the first hill with gorgeous views of the park and New Jersey countryside. But you have to take it in fast. This coaster doesn't linger at the top at all.

And that first drop is a real doozy. The park says it's 87 degrees steep.

Within seconds of the drop, you're already back up the next hill and being thrown into a mind-bending series of inversions, twists and more hills as the single track snakes in and out of itself.

Bright, primary colors dominate. The coaster cars are deep red, and the single track is an orange-yellow.

A few Jersey Devil stats
The park laid the final piece of track back in January and shared some of the coaster's features:
-- Max speed is 58 mph (93 kph)
-- It's 13 stories high with the 130-foot first drop
-- It covers more than 3,000 feet (915 meters)
-- It offers "three dramatic inversions including a 180-degree stall, raven dive and zero-gravity roll."

How did Six Flags come up with the wicked name?
"Jersey Devil folklore has been a source of fear and intrigue here in the Pine Barrens for more than 200 years. We'll immerse riders in this iconic piece of New Jersey history on our monstrous, new scream machine," said Great Adventure President John Winkler, according to the Staten Island Advance.

Rider review
On the Coaster Studios YouTube channel, a group went out on the park's media/VIP preview day to record their ride and give their critiques.

"It's just so different than every other attraction here," said Taylor Bybee on the video as the ride concludes.
"I thoroughly enjoyed it," Bybee told CNN Travel on the evening of June 14. "I think we got six or seven rides on it."

It's more than an interesting design and engineering fact that the Jersey Devil is a rare single-rail coaster, Bybee said. It affects the entire ride experience.

"Single rail allows the ride to take tighter maneuvers that you couldn't do with a traditional roller coaster. You just have one seat across -- it means you have a smaller radius to rotate around," he said.

"This ride experience is a lot crazier. It's very dynamic -- you go from one element to the next without too much time to get a break."

Bybee said it's a very smooth ride with different sensations depending on whether you're up front or back.
The highlight of the ride for Bybee? The Zero-G stall. He said it flips you upside down and holds you upside down briefly. While you'll find that on other coasters, "this one did it very well."

That coaster is the Kingda Ka. It goes up to a hold-onto-your-stomach height of 456 feet (139 meters) and reaches a top speed of 128 mph (206 kph). It's also located at Six Flags Great Adventure in New Jersey.