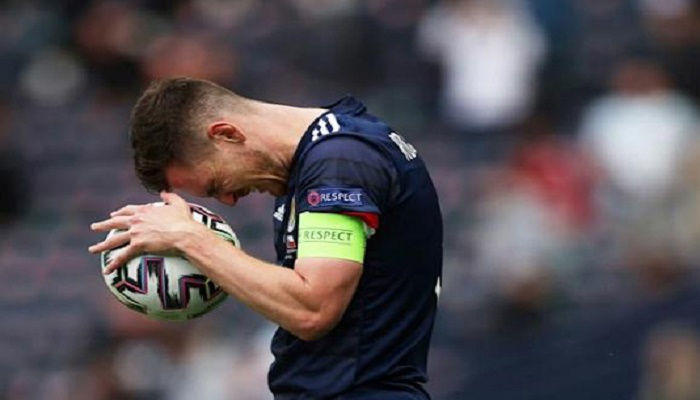 After 23 years waiting to join in the party at a major tournament, it took just 90 minutes for the hype and hope that has swept Scotland in recent months to make way to a familiar feeling of disappointment.

The Czech Republic silenced a 12,000 crowd at Hampden on Monday with a 2-0 win thanks to two goals and one moment of magic from Patrik Schick that will live long in the memory.

Schick had already headed the visitors into a half-time lead before he fired home from just short of 50 metres early in the second half having spotted David Marshall well off his line.

“I saw he was out there, so I slammed it in,” said the 25-year-old, who was labelled a “genius” by his manager Jaroslav Silhavy.

Yet, it was Scotland’s own self-inflicted wounds that cut deepest for Steve Clarke’s men.

A bad day began before kick-off when Arsenal’s Kieran Tierney was a shock absentee from the starting line-up due to an untimely injury.

Arguably his country’s best player over the past year, Tierney has been fundamental to the improvement under Clarke that saw Scotland end their long wait to reach a major finals.

Previous managers failed to blend him and Liverpool’s Andy Robertson together in the same side with both natural left-backs.

But Tierney had shone on the left side of a back three in recent months at international level.

Without him, Scotland’s scarce resources of international class centre-backs was exposed, particularly in possession as Jack Hendry, Grant Hanley and Liam Cooper struggled to beat the Czech press.

Yet, Scotland still had more than enough chances for the result to have been very different.

Robertson was denied by Tomas Vaclik at 0-0, Hendry hit the bar at 1-0 and Lyndon Dykes fired too close to the Sevilla goalkeeper with the chance to get Scotland back into the game 20 minutes from time.

“We were confident, excited, and it comes down to not taking our chances,” said Robertson.

“You can’t say we’ve not created – we’ve had some really, really good chances that we should have done better with.

“If you do better on that, then it’s a different game. It’s a tough lesson for us that at the highest level, at the best tournaments, you have to take your chances. The Czech Republic did that, we didn’t.”

Clarke was determined to stress before the tournament that Scotland were not simply happy to make up the numbers after ending their exile from the big stage.

But hopes of reaching the knockout phase now hang by a thread.

A trip to Wembley to face England on Friday conjures up the perfect opportunity for redemption against their bitterest rivals.

However, the realistic chances of upsetting the side ranked fourth in the world on home soil look slim based on the gulf in class on offer to Clarke and Gareth Southgate.

After two years of an upward curve since taking charge, Clarke will also face questions of his team selection.

In contrast to Southgate’s trust in youth during his time as England boss, Clarke left exciting prospects Billy Gilmour and Nathan Patterson on the bench for the full 90 minutes.

Introducing them for a first international start at Wembley would be a brave call, but the former West Brom and Kilmarnock boss hinted there would be changes when asked if he had any regrets over his starting line-up.

“Hindsight is a wonderful gift; nobody’s got it,” he added.

“It’s a good learning experience. We didn’t come here to learn but you still have to learn your lessons and take your chances when they present themselves.”

Scotland have two more shots at glory, but they have wasted the most presentable one.