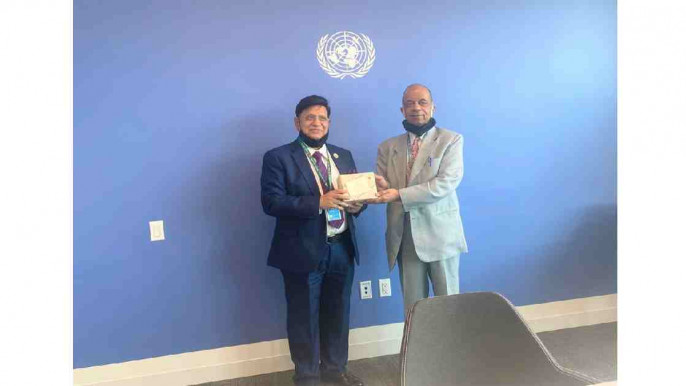 The United Nations has welcomed the proposal of Foreign Minister Dr AK Abdul Momen to invest in strategic communications showcasing women in peacekeeping in an effort to increase their participation in peacekeeping.

During the meeting, the Foreign Minister reiterated Bangladesh's commitment to peacekeeping and thanked the Under Secretary General for their support to Bangladesh, especially for including Bangladesh Biman to transport the peacekeepers to the field.

USG Khare expressed his deep appreciation to Bangladesh for their contribution to peacekeeping.

He appreciated Bangladesh for its leadership in implementing the UN's environmental strategy in the field.

The foreign minister invited Khare to visit Bangladesh at an opportune moment and share his insights on peacekeeping with the audience in Bangladesh.

Among others, he will attend the joint thematic event on LDCs at the United Nations General Assembly, and two important events “The current Situation in Myanmar: implication for the Rohingya Minority” and “Building Resilience for Sustainable and Irreversible Graduation of the LDCs” organised by Bangladesh, along with other UN Member States and UN Secretariat.

He is scheduled to meet the UN Secretary-General, President of the General Assembly, and other high-level UN dignitaries during his week-long visit.