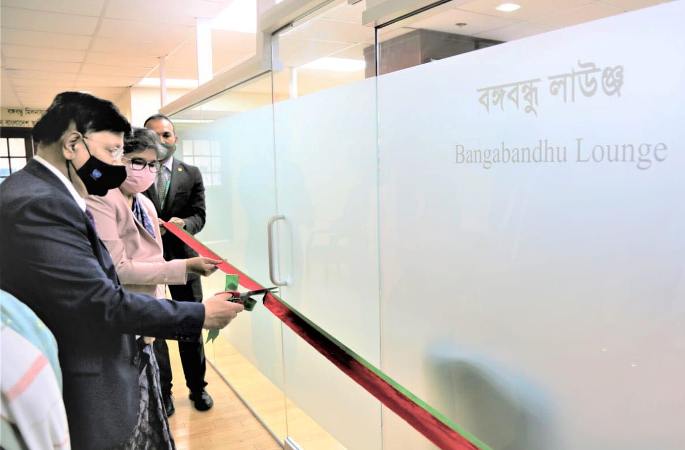 The lounge has been set up as part of the observance of Bangabandhu’s birth centenary.

“The lounge houses a rich collection of books, photos, documentaries, and graphical display on the life and work of the Father of the Nation. It demonstrates Bangabandhu‟s trust and faith in multilateralism; particularly the UN.” said the Foreign Minister.

He also expressed his interest to contribute in the lounge with more books and other display materials.

“The lounge has been set up last year; however due to COVID 19 pandemic it couldn‟t be formally inaugurated. We are happy to have Foreign Minister among us to finally inaugurate the lounge. This lounge will to serve as a reminder of Bangabandhu’ legacy and vision for world peace,‟ said Ambassador Rabab Fatima.

This lounge will be also used as a venue for high level meetings of visiting dignitaries from the UN and the member States offering an opportunity to them to learn about Bangabandhu’s ideals and visions.

Under the leadership of Bangabandhu, Bangladesh joined the UN in 1974 and since then it is playing an outstanding role in multilateral system.

Currently it is serving as the Vice-President of the UNDP/UNFPA/UNOPS Executive Board, facilitating the intergovernmental consultations on the alignment of the agendas of the UN General Assembly and co-charing the Intergovernmental Preparatory Committee for the Fifth United Nations Conference on the Least Developed Countries to be held from 23 to 27 January 2022 in Doha, Qatar.

This year, it has also been elected as a vice-President of the 76th Session of the United Nations General Assembly.

Later in the afternoon, Hon'ble Foreign Minister met with Atul Khare, Under Secretary General, Department of Operational Support at the UN Secretariat.

During the meeting, the Foreign Minister reiterated Bangladesh's commitment to peacekeeping and thanked the Under Secretary General for their support to Bangladesh, especially for including Bangladesh Biman to transport the peacekeepers to the field.

USG Khare expressed his deep appreciation to Bangladesh for their contribution to peacekeeping.

He thanked Bangladesh for its leadership in implementing the UN's environmental strategy in the field. Khare also appreciated Bangladesh's readiness to deploy peacekeepers with enabling assets.

The foreign minister invited Khare to visit Bangladesh at an opportune moment and share his insights on peacekeeping with the audience in Bangladesh.

Among others, he will attend the Joint Thematic event on LDCs at the United Nations General Assembly, and two important events “The current Situation in Myanmar: implication for the Rohingya minority” and “Building Resilience for Sustainable and Irreversible Graduation of the LDCs” organized by Bangladesh, along with other UN Member States and UN Secretariat.

He is scheduled to meet UN Secretary-General, President of the General Assembly, and other High Level UN dignitaries during his week-long visit.