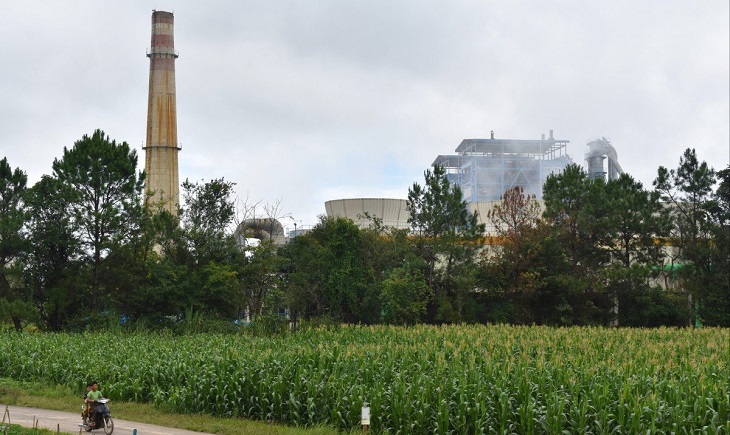 Almost two decades ago, in a small hillside town in southern Shan State, Myanmar’s largest coal-run power plant was built. Tigyit has been forever changed by this joint venture between the China National Heavy Machinery Corporation and a group of Myanmar businessmen affiliated with the country’s ruling generals who were responsible for the coup d’état on February 1, which ended the nation’s all-too-brief flirtation with democracy.

About 60 hectares of land were confis­cated to build the Tigyit plant, yet local communities surrounding the site, such as the Pa’O and Taungyo people, say they have seen no compen­sation for the land appro­priated for the power station or for the adjacent forests that have been razed to make space for mining the coal that fuels the plant.

“We venerate the forest,” says Pa’O farmer Daw May Thant. “It was inhabited by traditional nat deities.”

Inside her wooden stilt house opposite the power plant, the 60-year-old stores bags of onions and garlic to be sold at the local market. “When we wanted to catch fish or birds, we needed to ask the nat spirits for permission,” but now, she says, lamenting the loss of these spirits as she throws her arms in the direction of the power plant, “there’s nothing left”.

Myanmar has 17 large-scale coal deposits, with total resources of more than 500 million tonnes, mostly of sub-bituminous rank. Combustion of this lower-grade coal leads to hazardous emissions of sulphur oxides, nitrogen oxides and sulphur.

“Companies are mining non-stop on private land, taking advantage of the turmoil” which has spread across the country after the coup, says Tigyit local Sai Sam. With no government authorities paying attention, let alone regulating, “the mining has dried out the local springs, leaving us with even more polluted water”.

Khun Oo, chairman of the long-standing Pa’O Youth Organisation, says to make space for the coal-powered plant 20 years ago, “many farmers were forced to re­locate to other parts of the hills, and to make ends meet they converted parts of the forest into farmland. In times of military dictatorship, people did not dare object to the [relocation] order. Under the civilian government, people tried to receive proper compensation or demanded the restoration of land and community forests”.

Daw Kan Kayn, one of the leaders of the civil society organi­sation People’s Voice, says when Aung San Suu Kyi’s National League for Democracy came to power, in 2015 – following the Nobel Peace Prize winner’s 15 years of house arrest by the military – “we were told by the authorities that coal is the best source of energy for the country, and that after refurbishments the plant won’t pollute any more”.

An independent report by the Myanmar Alliance for Transparency and Accountability (MATA) in 2019, however, identified cadmium in the hair of children in and around Tigyit to be “at levels that equate to a serious public health crisis”.

“We were stunned,” says Daw Kan Kayn. “Another report, prepared by E Guard Environmental Services, a Yangon-based auditor selected by public bid, did not assess the potential effects of mining and burning large amounts of coal. The Chinese-paid consultant assured local communities that coal was the most advantageous way to get electricity.”

The MATA report slammed the paper prepared by the contractor, stating that “for all the pollutants sampled in Tigyit, the levels were higher than national standards, and the concentrations of high metals in the water are above World Health Organisation drinking-water standards”.

Although environmentally conscious investors have shied away from dirty power in favour of renewable sources in recent years, China’s state-owned fossil-fuel technology and financing might attract interest among Myanmar military leaders or those aligned with the regime, as more coal plants are planned to meet ambitious targets to provide the country’s rural areas with electricity.

“We were approached by Chinese researchers,” says Khun Oo. “They wanted to examine the reasons behind local communities opposing the coal-based investments but we declined to speak to them. Villagers want their land back, to restore it to what it used to be, but the government clings on to the need to operate this plant.”

Aiqun Yu, China researcher at San Francisco-based NGO Global Energy Monitor, says, “There are cases in Southeast Asia where Chinese financing is made available, and there are examples where a coal plant that does not meet pollution standards within China was exported and still received Chinese public finance, like in Cambodia.”

In nearby Vietnam, too, another country hungry for energy investment, China was reported to have sold outdated technology.

According to a MATA report, prepared jointly with NGOs Greenpeace and Waterkeeper Alliance, a 2018 refurbishment of the Tigyit plant did not stop heavy metals from stored coal ash in the plant seeping out and damaging the health of locals.

“There have been continued reports of miscarriages, cancers and other serious diseases,” says Ye Win Myint, a MATA member responsible for monitoring the situation around Tigyit. “The plant is emitting more mercury than acceptable by international standards, mostly due to a lack of proper filtering.

“We hoped for a change in the attitude of the govern­ment,” adds Ye Win Myint, who in late 2019 met officials of the Environmental Conservation Department based in the capital, Naypyidaw. “But instead, after we passed the findings of the independent report to them, we encountered silence.”

In mid-2020 in Myanmar’s parliament in Naypyidaw, the deputy minister for electricity and energy, U Khin Maung Win, praised the Tigyit plant for its importance to the country’s development, and stated that trees planted by the Forest Department in the area around the power station were sufficient to deal with any pollution.

“I didn’t know whether to cry or laugh when I heard that,” says Sai Lynn Myat, a politician from the Shan Nationalities League for Democracy.

Fellow party member Sai Tun Aye had proposed that the plant be shut down, but the motion was rejected by parliament in May 2020.

“The communities have received seedlings both from the Forest Department and youth groups, but their impact is limited,” says Khun Oo. “Also, many trees do not survive due to lack of water in the hot season.”

Whether protesting the coup or the adverse effects of the power plant on the people of Tigyit, any form of dissent is becoming increasingly dangerous.

“I shut down the office [for the time being] and went into hiding,” says Khun Oo. “In the past, we criticised the military for their actions in Shan State, but these days, no one knows what will happen.”

Despite the real and potentially fatal risks, activists “organised two peaceful protests in October 2019 to draw the attention of the authorities”, says Daw Kan Kayn, who “mobilised through social media and youth groups, and together we marched to call for the shutdown of the Tigyit power plant”.

Facing detainment at best, and violence at worst, anti-coup protesters are demanding the restoration of democracy and the abolition of the 2008 constitution, which prescribes the special role of the army in guiding the so-called disciplined democracy. Although the act stipulated the separation of powers between the president, parliament, the judiciary and the armed forces, this was not observed, making reforms harder, if not impossible.

And yet, pockets of protest continue, and Daw Kan Kayn is not about to give up. “We need to be vocal about our rights,” he says, “and about our environment.”