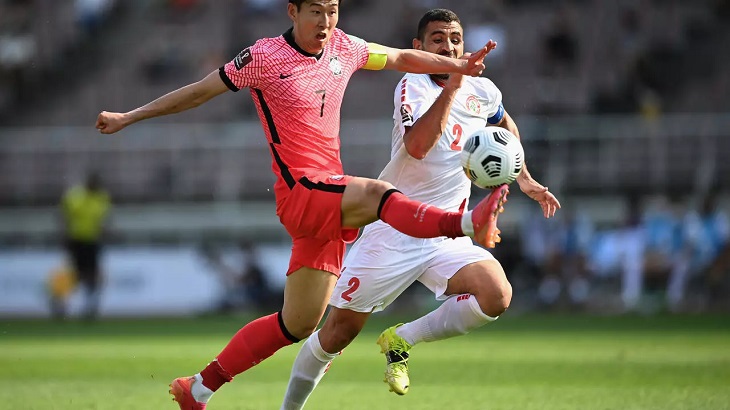 Son Heung-min scored the decisive goal in South Korea's 2-1 victory over Lebanon in a World Cup qualifier Sunday before sending a message of support to his former teammate Christian Eriksen.

After converting a penalty to help his side come from behind to take the lead at Goyang Stadium, the South Korea skipper held up his hands to show the number 23 - Eriksen's shirt number at Tottenham Hotspur.

He then offered a few words in the direction of a nearby TV camera before kissing it.

Eriksen collapsed while playing in Denmark's Euro 2020 match against Finland on Saturday and required CPR before he was taken to hospital, where his condition has reportedly stabilised.

The pair were teammates at the English Premier League club for four-and-a-half seasons before Eriksen joined Inter Milan in 2020.

Son played a key role Sunday in the South Korean comeback win which sealed their place at the top of Group H, sending them through to the third round of the Asian qualifiers for the 2022 World Cup and the 2023 Asian Cup finals in China.

While the hosts dominated possession, it was Lebanon who took a surprise lead in the 13th minute when Soony Saad's excellent shot on the turn went in off the far post.

The Lebanese defence held out until half-time but the home side's pressure finally told in the 51st minute when Son's corner from the right was headed in by Song Min-kyu off a deflection by Maher Sabra.

The home side were then awarded a penalty in the 71st minute after defender Joan Oumari handled the ball in his box. Son beat goalkeeper Mehdi Khalil with a firmly struck shot into the bottom right corner before showing his support for Eriksen.

Lebanon finished second in Group H and could still qualify for the next round of the World Cup qualifiers if results on Tuesday in the other groups go their way.