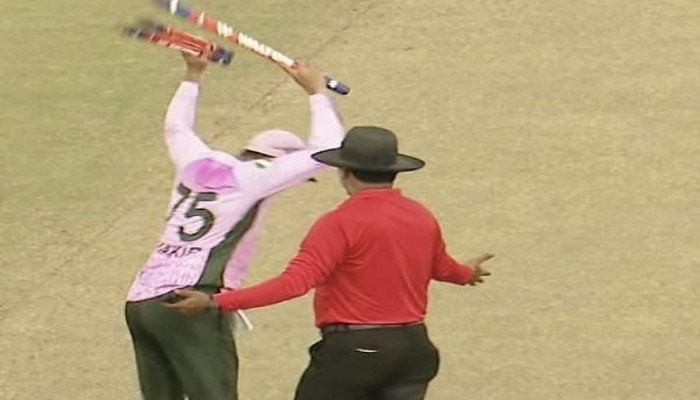 Mohammedan Sporting Club appealed to reduce the sentence of their captain Shakib Al Hasan who was suspended for three matches and fined Tk. 5 lakh for kicking and throwing down the stumps as well as misbehaving with the umpire.

Mohammedan cricket committee chairman Masuduzzaman confirmed the news, saying that they had already sent a letter to the Cricket Committee of Dhaka Metropolis (CCDM) in this regard.

CCDM member secretary Ali Hossain said they had not yet received the letter.

“We have appealed to the CCDM to reduce Shakib’s sentence. We mailed last night after we got the decision from the BCB. Since it was too late, we mailed first. I have written directly to the CCDM today,” Masuduzzaman told the media today.

As per the match referee and umpires’ report Shakib did a Level 3 offence for which he was banned for three DPL matches and fined Tk. 5 lakh.

A BCB press release however stated that: “Dhaka Mohammedan Sporting Club Limited’s Shakib Al Hasan has been suspended for three matches of the ongoing Bangabandhu Dhaka Premier Division T20 Cricket League 2019-20 and also fined BDT 5 lakh for breach of the BCB Code of Conduct. The allrounder was reported for two counts of misconduct during a match against Abahani Limited on June 11.”

“Shakib was found guilty of conduct that is contrary to the spirit of the game after showing aggressive behaviour towards the umpire on the last ball of the fifth over of the Abahani innings which constitutes a Level 3 Offense. The player was also penalised for a second Level 3 breach for bringing the game into disrepute through use of offensive language and reckless conduct with the umpires after the fifth ball of the sixth over of the innings.”

“The player accepted the sanctions and as such no formal hearing was required.”