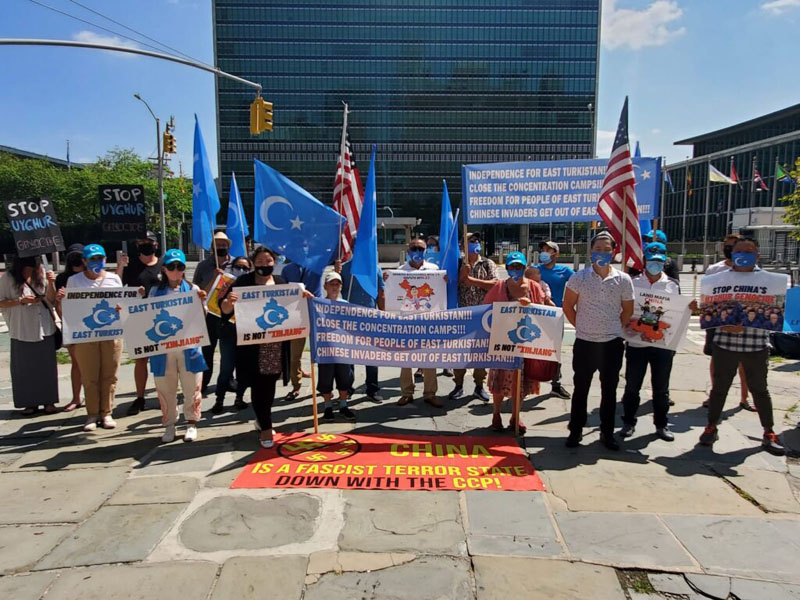 While the leaders of Canada, Germany, France, Italy, Japan, the UK, and the United States are in Cornwall, UK at the 47th G7 Summit, Uyghurs are reminding these heads of states to act against China.

Members of the G7 meet every year for a summit to discuss important issues on the global stage and coordinate policy.

In recent years, China has been engaging in a brutal campaign of genocide and other crimes against humanity against Uyghurs and other Turkic peoples in East Turkistan, what Beijing calls “Xinjiang.”

China and its Communist Party’s actions have been designated as genocide by the Government of the United States and the Parliaments of Canada, The Netherlands, the UK, and Lithuania.

Lawyers acting on behalf of The East Turkistan Government in Exile and the East Turkistan National Awakening Movement filed further evidence to the International Criminal Court to establish jurisdiction regarding their ongoing case to prosecute China’s officials accountable for genocide and other crimes against humanity.

There is no doubt that China’s ongoing genocide in East Turkistan is one, if not the most, pressing humanitarian crisis across the globe.

The East Turkistan Government in Exile and the global East Turkistani/Uyghur diaspora are calling on the international community, especially the G7 nations, to address the humanitarian crisis in East Turkistan and act to bring a swift end to decades of China’s prolonged campaign of colonization, genocide, and occupation there.

“We again call on the G7 nations to issue a strong unified response to China’s ongoing genocide against Uyghurs and other Turkic peoples in Occupied East Turkistan,” said Prime Minister Salih Hudayar of the East Turkistan Government in Exile.

--Jointly condemn and recognize China’s atrocities against Uyghurs and other Turkic peoples in East Turkistan as genocide;

--Push back against Chinese intelligence operations targeting the East Turkistani/Uyghur organizations and diaspora communities across the globe;

--Bring East Turkistan issue to the agenda of the UN Security Council;

--Engage in Diplomatic Boycotts of the Beijing 2022 Winter Olympics;

--Call on the UN and its member states to enforce the UN Genocide Convention and Uphold the Responsibility to Protect Commitment;

--Acknowledge the root of China’s ongoing colonization and genocide in East Turkistan by recognizing East Turkistan as an Occupied Country / Captive Nation;