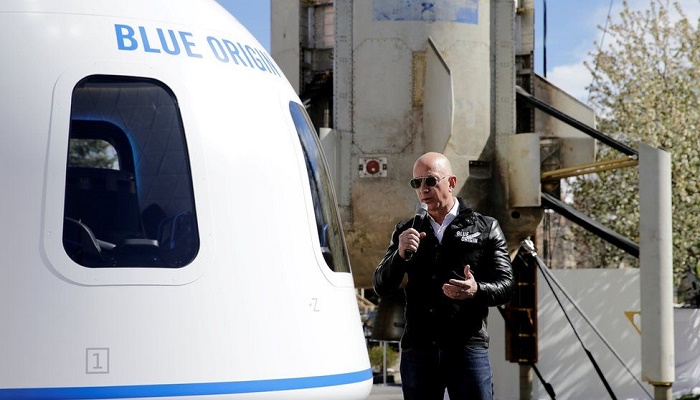 This winning bid was made at Saturday's auction, with Blue Origin tweeting that the winner's identity would be revealed in the coming weeks.

The bidding process attracted interest from more than 140 countries.

The other two crew members of the 20 July flight are Mr Bezos' brother Mark and an unnamed space tourist.

After a nearly month-long bidding process the top bid had stood at just under $5m - but once Saturday's online auction got under way that figure rose more than five times.

"On July 20th, I will take that journey with my brother," he wrote in a post on Instagram earlier this week. "The greatest adventure, with my best friend."

According to Blue Origin's website the company plans to launch its passengers more than 100km (62 miles) above the Earth's surface, allowing them to experience microgravity. The six-berth capsule will return to Earth using parachutes.

The trip is expected to last about 10 minutes.

The New Shepard booster can land vertically on the ground after returning from space. It is named after Alan Shepard, the second person and first US citizen to fly into space.

The first crewed flight comes just weeks after Mr Bezos plans to step down as CEO of Amazon.

Instead he will serve as executive chairman of the e-commerce giant he founded 30 years ago in his garage, allowing him "time and energy" to focus on other ventures.

Meanwhile, a rival space pioneer could steal a march on Mr Bezos. It is thought Richard Branson might join a test flight of his Virgin VSS Unity spaceplane on 4 July.