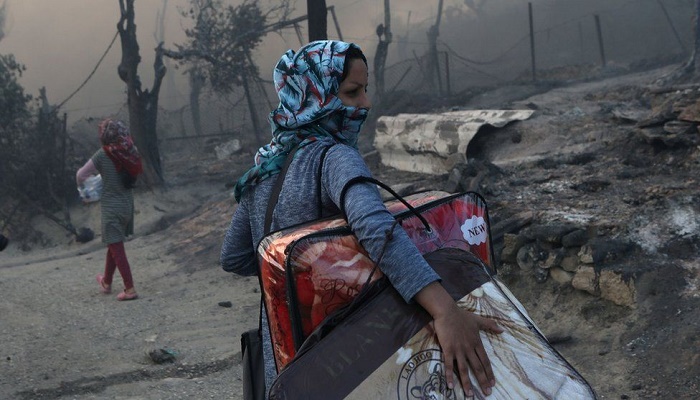 A Greek court has sentenced four young Afghan asylum seekers to 10 years in jail each after they were charged with starting fires that destroyed Europe's largest migrant camp last year.

Defence lawyers said the men, who denied the accusations, were found guilty of intentional arson.

The defence described the trial as unfair.

The destruction of the overcrowded Moria camp on the island of Lesbos left nearly 13,000 people without shelter.

The fires in September broke out as tensions soared over restrictions imposed to curb the spread of Covid-19.

Defence lawyers quoted by AFP news agency said the trial was not fair. They said three of the accused had documents showing they were under 18 at the time of their arrest but were not recognised as minors by Greek authorities.

Journalists were not allowed inside the courtroom on the island of Chios because of Covid-19 measures.

The trial was largely based on the testimony of another Afghan asylum seeker, who identified the accused.

The defendants said they had been framed because they were Hazaras, a minority Afghan ethnic group.

In March, two Afghan youths were convicted in the same case and received five-year jail terms.

The Moria camp was designed to house 3,000 migrants but became overcrowded after huge numbers of refugees started arriving in 2015. Most of them had come from the Middle East, Africa and South Asia.

A temporary camp set up on Lesbos houses about 6,000 people. A new permanent facility is due to be built. Overall, about 10,000 migrants remain in the Greek islands.