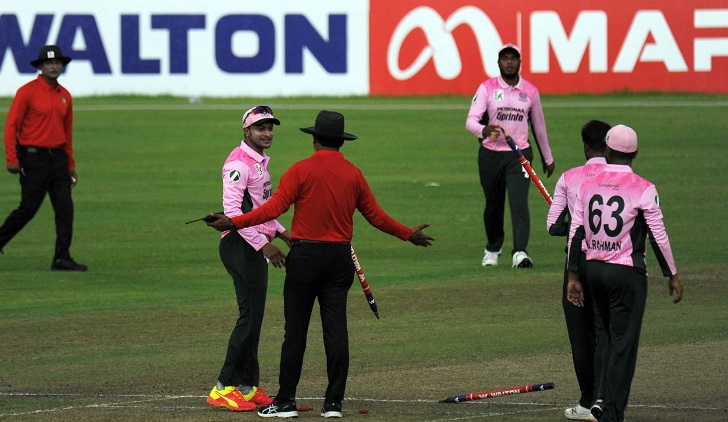 Mohammedan Sporting Club captain and ace all-rounder Shakib Al Hasan has been banned for four matches in Dhaka Premier League (DPL) for his misbehaviour with the umpire centering a leg before wicket (LBW) appeal.  He has also been awarded Tk 5 lakh compensation.

The two giants Abahani Limited and Mohammedan Sporting Club faced off in the DPL on Friday (June 11). But in the match, Shakib’s altercations with on-field umpires and Abahani officials turned out to be talk of the town.

During the fifth over of Abahani's batting, Mohammedan captain Shakib saw his leg-before wicket appeal against Mushfiqur turned down, which angered him so much so that he went up to the umpire and kicked the stump.

That was not the end. As the dark clouds hovering over the sky, the umpires asked the covers to be brought on but Shakib came in and threw down the stumps before leaving the ground as the later ball would give Mohamedan a chance to win in D/L method.

He, however, apologised for the misbehaviour on his Facebook handle.

"Dear fans and followers, I am extremely sorry for losing my temper and ruining the match for everyone and especially those who are watching from home. An experienced player like me should not have reacted that way but sometimes against all odds it happens unfortunately. I apologise to the teams, management, tournament officials and organizing committee for this human error. Hopefully, I won't be repeating this again in the future. Thanks and love you all ❤️ SAH," Shakib posted on Facebook.