12 Rohingyas flee Bhasan Char, but make it only as far as Companiganj 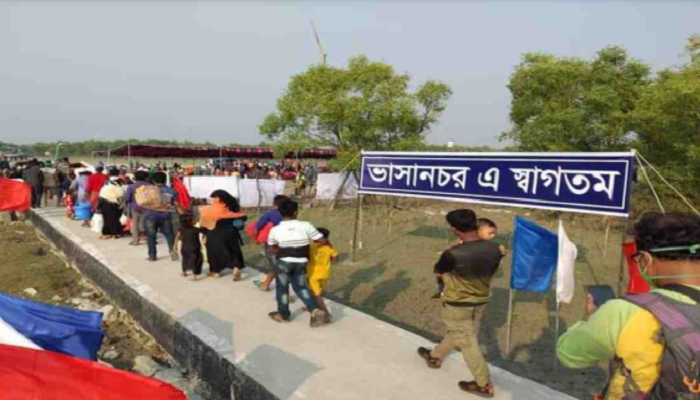 Police detained 12 Rohingyas, including four children, from Noakhali's Companiganj Friday while they were fleeing Bhasan Char of the district's Hatiya.

Locals spotted them at Dakkhiner Ghat of Ward 3 of Char Elahi Union in the morning.

During interrogation, the Rohingyas admitted that they had escaped Bhasan Char on a rented boat at the dead of night Thursday to go to one of the camps in Cox's Bazar, according to locals.

On information, Companiganj police went to the spot and brought the 12 Rohingyas to the police station.

Companiganj Police Station Officer-in-Charge (Investigation) Md Abul Kalam Azad said, "The detained Rohingyas have been kept in police custody and arrangements are being made to file a case against them."

Since December last year, the government has moved around 20,000 Rohingyas to Bhasan Char and plans to relocate 100,000 refugees to the island.

Bhasan Char is seen by Dhaka as a solution to the severe overcrowding found in the camps dotting the two southern-most upazilas of Cox's Bazar, itself the country's southern-most district, on the border with Myanmar's Rakhine state.

Dhaka has also consistently denied accusations that some of the refugees may have been moved there under duress, or involuntarily at least.