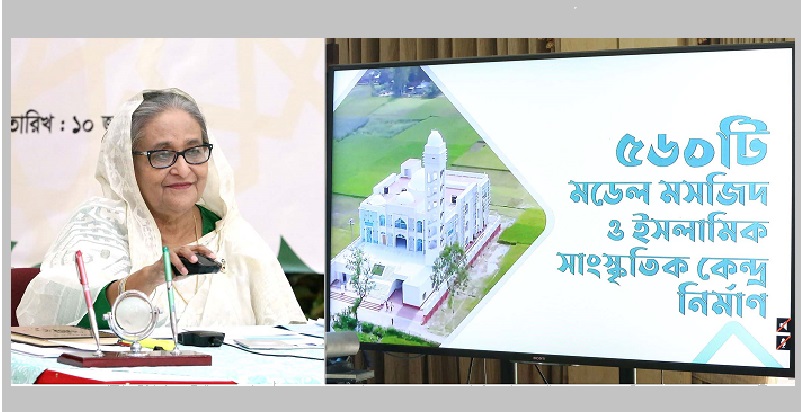 Muslim devotees have expressed gratitude to Prime Minister Sheikh Hasina for the construction of modern mosques across the country to preach true message of Islam.

"Honorable Prime Minister, you have set a rare example in the world by undertaking the project to construct 560 model mosques across the country,” said AKM Zakaria, a musulli of Khulna Alia Madrasah Model Mosque, while interacting with the premier after its inauguration.

On the occasion of the birth centenary of Father of the Nation Bangabandhu Sheikh Mujibur Rahman, Prime Minister Sheikh Hasina inaugurated 50 model mosques-cum-Islamic cultural centres across the country.

The inaugural ceremony was held at Osmani Memorial Auditorium in Dhaka with State Minister for Religious Affairs M Faridul Haque Khan in the chair. The premier joined it virtually from her official residence Ganabhaban.

AKM Zakaria, who has been offering prayers at the madrasah mosque for the last three decades, said these model mosques will play a pivotal role in eliminating militancy and other social crimes, including violence against women.

He said all people of Khulna are very much happy with such a modern mosque equipped with all facilities for preaching the true essence of Islam.

“The people will remember you forever and your name will remain written in golden letter.”

Lecturer (Arabic) of Khulna Alia Madrasah Md Saiful Islam said the model mosques are totally different from others as these are equipped with all facilities.

These mosques will be used for offering five times prayers in a day, he said, adding it will also produce Hafize Quran and will have conference room, library, rest house, training facility and making bath dead bodies, which are unavailable at general mosques.

A woman devotee, Yeasmin Begum, who was connected from Badarganj in Rangpur, became emotional, saying: “It is great pleasure for us that we would offer prayers at mosque along with male devotes after the era of Prophet Mohammad (PBUH). And you, our bride, have made it possible.”

“We wished you long and healthy life so you can serve for long,” she added.

Another musulli connecting from Dakshinsurma Upazila Model Mosque said, “You’ve honoured us by giving such a gift of model mosque following your father’s footsteps of establishing Islamic Foundation for preaching the true Islam.”

The people will remember your contributions to Islam, he said, adding, “We pray for eternal peace of the departed souls of Bangabandhu and other martyrs of the August 15, 1975 carnage”.

While briefing the newsmen on the premises of Savar Upazila Model Mosque on Wednesday, Deputy Project Director (DPD) Shafique Talukder said imbued with the spirit of Islam and following the footsteps of the Father of the Nation, Prime Minister Sheikh Hasina has come up with the idea of constructing 560 model mosques at a cost of Tk 8,722 crore.

It is the second largest project after Padma Multipurpose Bridge, which is being implemented with own funding, he said, adding: “It is the first ever in the world that any government is building such a large number of mosques at a time.”

According to the project documents, the purpose of the project is publicity of Islamic brotherhood and its values as well as disseminating the essence of Islam against extremism and militancy as the religion never support those.

It would also put concentration on creating awareness against terrorism and violence against women along with disseminating development activities of the government.