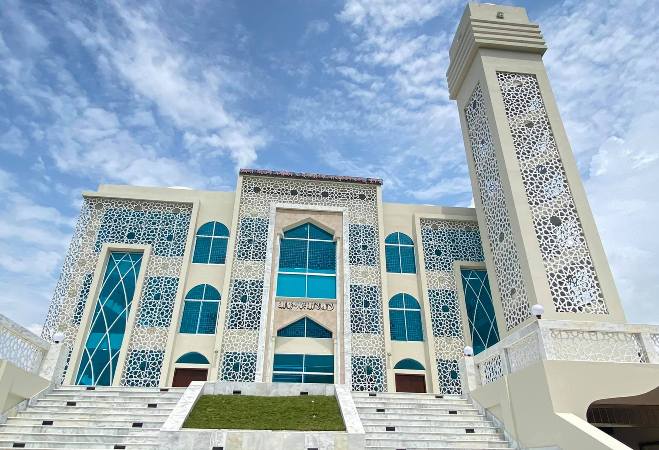 Prime Minister Sheikh Hasina on Thursday opened 50 luminous model mosques newly-constructed across the country, fulfilling one of her election pledges.

The landmark mosques have been built as part of the government’s move to set up 560 such mosques-cum-centres of excellence at district and upazila levels, aiming to spread Islamic fraternity, real Islamic values and practices, conduct research, create strong infrastructures for prayers for both men and women, provide religious teaching and training and enhance public awareness against social diseases.

The Prime Minister opened the 50 model mosques virtually from her official residence Ganabhaban on the occasion of the Mujib Year.

The government is implementing the project with its own fund to fulfill the pledge Hasina made in the election manifesto before the 2014 national election to build a model mosque in every district and upazila in the country.

Besides, 100 more model mosques will be opened in the second and third phases by 2021, marking the birth centenary of Father of the Nation Bangabandhu Sheikh Mujibur Rahman, according to officials of the project.

Each model mosque is being constructed on a 40-decimal plot under three categories.

Sixty-nine four-storey mosques are being constructed in district towns and city corporation areas under category-A, while 475 three-storey ones in upazilas under Category-B and 16 four- storey ones in coastal areas.

A district model mosque has enough space for some 1,200 devotees to simultaneously offer prayers. The upazila-level mosques can accommodate 900 devotees at a time.

Each spectacular mosque is costing Tk 15.62 crore in district town or city area, while Tk 13.52 crore in upazila areas and Tk 13.61 crore in coastal areas.

In a model mosque cum-Islamic cultural centre, there are separate prayer halls and ablution places for men and women.

The centres have Islamic libraries, Islamic book sale corners, training centres and pre-registration for hajj aspirants and Imams; Hifzkhana (where the holy Quran is taught and memorised by students) and the offices of Islamic Foundation.

Another significant addition to the mosques is autism corners and guest rooms for tourists (both local and foreign). They also have arrangements for Islamic research and religious activities and funeral activities. Besides, facilities are there for educating children and the mass people.

The mosques offer housing facilities for Imams and Muezzins and offices for its staff. One of the most interesting additions is the toilet facilities for the physically-challenged devotees.