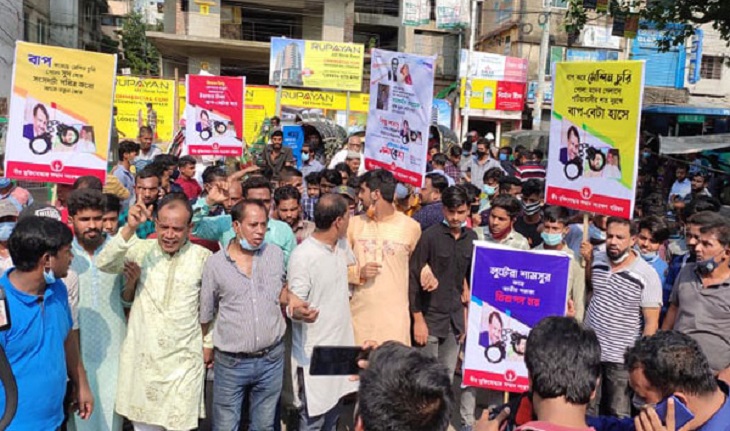 Not only that, the whip family also organised a traditional feast ‘Mezban’ for the hired people at a community center in Patiya, said sources.

The followers of whip started gathering the hired people including children and teenagers in the city’s Jamal Khan intersection through buses and microbuses.

Sources informed that the whip family arranged several buses from each union to bring the people in a bid to foil the programme organised by the freedom fighters, their family members and people from all walks of life.

Some teenagers were seen holding placards and banners with the name and photos of Shamsul Hoque Chowdhury.

The teenagers said they had lunch at a community centre in Patiya and came to the programme with a ‘big brother.’

South district Chhatra League leader Abdullah Al Noman brought them to the city and everyone was paid Tk 1,000, they said.

Mentionable, freedom fighters, their family members and people from all walks of life under the banner of ‘Bir Muktijoddha Samman Sangrakkhan Parishad’ organised a human chain and rally in front of Chattogram Press Club on Wednesday afternoon to protest the threat to kill freedom fighter and senior Awami League (AL) leader Shamsuddin Ahmed by Whip Shamsul and his son Sharun.

But, police didn’t allow them there as another organisation reportedly patronised by Shamsul and his family announced to hold programme at the same place.

The organisation under the patronage of Shamsu held meeting blocking road near the Press Club later.

The Parishad leaders formed a human chain in front of Cheragi Pahar intersection. As they wanted to go to the Press Club police barred them.

Later, they held a rally and human chain in front of the house of Chattogram City Awami League President Mahtab Uddin Chowdhury and Wasa intersection.

The Parishad leaders alleged that though police barred the freedom fighters’ programme, they allowed the Shamsul’s men to hold rally some 100 yards off the Press Club.