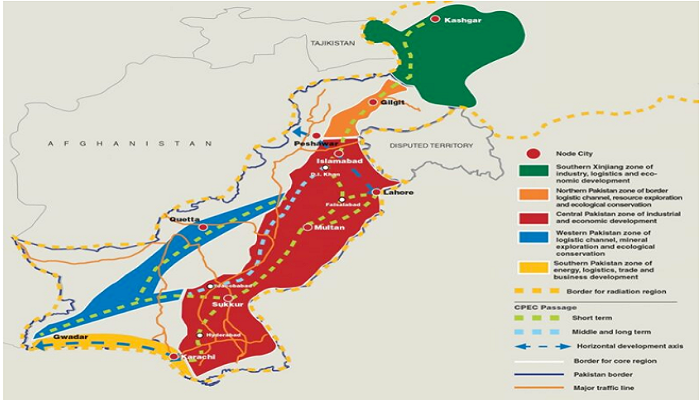 The China-Pakistan Economic Corridor (CPEC) is part of the grandiose Belt and Road Initiative (BRI) of China. The BRI, launched by President Xi Jinping in 2013 has taken up significant infrastructure projects funded by Chinese corporations and Chinese banks in Asian, African and European countries.

The CPEC was signed with the objective to improve trade and economic interdependence between China and Pakistan. The project was meant to connect the Gwadar port in Balochistan to Kashgar, located in the Xinjiang province in China. It was envisaged that this would provide a direct trade route with connectivity to the Middle East and other Asian, African and European markets from China’s Xinjiang province and massively reduce the transport costs for China.

Admittedly, Pakistan is a strategic partner to China. While the two countries have been trading partners over the past few decades having signed the Free Trade Agreement in 2006, the CPEC projects have gone a step beyond and offered multi-faceted privileges to China – Beginning from giving China a direct access to the Gwadar port to enabling the country increase its influence in the Indian Ocean Region. While China and Pakistan may claim that the purpose of the CPEC is to give opportunity to the ailing Pakistan economy by improving its energy sector, rail and road network, by creating Special Economic Zones (SEZs), sea ports, etc and to solve its growing energy crisis, one may however, wonder if through the CPEC, both China and Pakistan may be looking to counterbalance India.

THE ‘HIDDEN’ COSTS OF CHINA’S CPEC

While China itself pledges to achieve carbon neutrality by 2060, Chinese investment in fossil  fuel loaded projects through the CPEC show that China is dodging its responsibilities to  reduce its coal production at home and paving a way to market its coal which is abundant in  supply by investing in coal projects in host/partner countries (in this case Pakistan).

China has moved into a service sector driven economy from an industry driven one, and has  also made substantial effort in the renewable energy sector as part of its commitment to achieve  the Sustainable Development Goals (SDG) of the Paris Agreement at home. China is the largest investor in renewable technology. The same though, is not reflected in the investments that it has been making under various projects in the CPEC.

There are no reports from the Chinese government sources suggesting of China resorting to renewable alternatives in the host countries of the BRI (Parsons 2021). Additionally, while China undertook several environmental regulations as the country was reeling under severe air pollution, the same is not being adhered to in Pakistan.

As part of their commitments to the Paris Agreement, countries have to pace up the process of doing away the carbon emitting projects. The foremost ambition of the Paris Agreement was  to make efforts to keep the global temperature rise “well below 2°C above pre-industrial levels  and to pursue efforts to limit the temperature increase to 1.5°C above pre-industrial levels”.

China’s commitment to the Paris Agreement will thus remain rhetoric if it does not make use of clean technology in the CPEC schemes. The whole Paris Agreement may in fact fall flat considering China extends its CPEC strategy of fuelling infrastructural activities to other parts of the globe as part of its BRI.

THE COAL MENACE IN PAKISTAN

The CPEC has undertaken infrastructure projects in Pakistan to the tune of $62 billion so far.  The CPEC now involves more than 80 projects and crosses at length through all the provinces of Pakistan. Sixty percent of the CPEC projects are energy projects. A majority of these, approximately 70% of the total are fossil fuel emitting power plants and a very small percentage are hydro (20%), solar (7%) and wind (3%) projects (Oh 2018). Thus, the billions of dollars that China has pumped into infrastructure projects in Pakistan, or rather the fossil fuel loaded projects in the country, will leave a significant carbon footprint in the long run.

In the first phase of the CPEC, emphasis was laid on the coal based power plants for energy  production as the then Nawaz Sharif government wanted to solve the problem of electricity  that Pakistan has been facing since decades (also, an election agenda) and to reduce the  excessive dependence on oil (Adeney and Boni 2021).

Nonetheless, these coal-based power plants will thwart Pakistan’s commitments to the Paris Agreement (Downs 2019). According to a recent study (Ali, Khayyam, and Nazar 2021), the seven coal based power plants that are part of the CPEC are alone projected to emit 14,500 mt of carbon in 2020. The authors claimed that these new emissions will propel Pakistan to being a major global emitter of CO2 in the atmosphere (Ali, Khayyam, and Nazar 2021).

In the second phase of CPEC, Pakistan intends to adopt the coal gasification (coal-to-gas) and liquefaction (coal-to-liquid) process. However, Simon Nicholas of the Institute for Energy Economics and Financial Analysis says that coal gasification and coal liquefaction will be economically unviable as it involves huge capital investments and would heavily increase Pakistani debt (Nicholas 2021). Coal gasification involves very high usage of water and this technology might not work best during drought times. Unless adequate measures are taken for “carbon capture and storage”, the carbon footprint that these technologies are capable of depositing along with emission of SO2 and H2 (both being indirect greenhouse gases) would actually end up doing more harm than benefit to global warming (Lahiry  2018).

AN ENVIRONMENTAL DILEMMA WITH THE NORTH INDUS RIVER CASCADE

A significant amount of infrastructural activities are known to be occurring in the mountainous regions of the Himalayas. The Himalayan, Hindukush and Karakoram mountain ranges are home to around 54000 glaciers. They also contain endemic fauna such as Himalayan lynx, blue sheep, and the vulnerable snow leopards etc. The intensification of the CPEC projects would give rise to series of cumulative activities such as the increase in the vehicular movements for the construction of dams. The movement of thousands of trucks in the area is bound to significantly contribute to the carbon emissions. The SEZ’s would lead to blasting for the purpose of construction of roads and highways as well as massive deforestation which will mess up the entire ecosystem of these  mountain ranges, endanger the native species, and degrade the surrounding environment.

Also, the Himalayan region is very prone to snow and melting of ice resulting in unpredictable monsoons and glacial erosion. The region is characterized by recurrent earthquakes due to heavy geodynamic activity in the region (Derbyshire, Fort, and Owen 2001). The area where the CPEC projects are being constructed is reputed for occurrence of GLOF’s (Glacial Lake Outburst Floods). The construction of dams also meddles with the natural course of the glacial lake (which are also sensitive to carbon emissions induced global warming), resulting in GLOFs which can cause major damages to the dam structures, impact local people, their livelihood and other infrastructure in the area (Saifulla Muhammad and et. al. 2020). Incidentally, the Karakoram Highway (KKH) reconstruction plan is also part of the CPEC road and transportation projects. The deforestation that would eventually emerge from these transport related activities is expected to further contribute to the carbon spillage (Khan 2021).

Interestingly, in the second phase of the CPEC one does notice both Pakistan and China trying to push the sustainability agenda, albeit with not much progress on the ground.  This phase of the CPEC has been witness to China and Pakistan signing a couple of projects in Pakistan Occupied Kashmir. The Azad Pattan Power Project is a 90 metre high  hydel power project to be built on the Jhelum river in the Sudhnoti district (one of the 10  districts in POK). The other 1124 MW Kohala Power Project is located in Muzaffarabad district in POK. The project was protested by the residents by blocking the Muzaffarabad-Rawalpindi Highway as it would reduce the flow of the river Jhelum and further  decrease the water supply to the district other than causing substantive ecological degradation.

Additionally, China has invested upto $50 billion to produce roughly about 40,000 MW of hydroelectricity in what is termed as the North Indus River Cascade. As part of this grand plan, the Chinese are building 5 dams in a geologically sensitive and highly seismic zone area to form this River Cascade. The Bunji hydropower project is proposed to generate 7100 MW electricity and is located in the Gilgit-Baltistan region. Also, the 273 m tall Diamer-Bhasha dam which is scheduled to generate 4500 MW electricity is located here. The latter is particularly significant since it is known to lead to possible water scarcity in the Ladakh region.  Construction of such massive dams will have considerable environmental consequences on the entire Indus river basin and its main tributaries including those in India – Ravi, Beas and Satluj – and the Indian states dependent on it – Himachal Pradesh, Chandigarh, Jammu and Kashmir, Haryana, Punjab and Rajasthan. Some of the states are already reeling under severe water shortages and facing droughts. This is noteworthy since agriculture is the principal source of income in these states. Any interference on the Indus river basin could lead to changes in the water distribution system that would affect the water-dependent ecosystems of these states, and have a direct economic bearing on the people and their livelihoods. Infrastructural projects that are being constructed on the Indus River may also interfere with the atmospheric patterns, precipitation and temperature regulation, and may accelerate glacier melting in the Himalayan ranges. This could result in extreme events such as flash floods and landslides during the monsoon season and extreme droughts during the summers. The long-term effect of glacier melting would be water shortages in the Indus River basin affecting age old civilizations that have thrived on it.

It is clear that the burden of this environmental blunder will also have to be borne by China and Pakistan’s immediate neighbour, India. India has been constantly opposing the construction of these dams given the damaging influence it would have on the region’s environment. As such, if the North Indus River Cascade does get implemented, then India too will have to deal with a whole set of problems including flood management, water quality upkeep, desalination, etc.

Climate change is a generational issue. On the face of it, CPEC may give the impression that it will help improve the economy of Pakistan, but the environmental costs that Pakistan may have to pay for this economic collaboration will be too far to bear for generations to come. In fact it may open a plethora of environmental disasters for both, Pakistan and India.

As such, the environmental damage that the CPEC is meant to cause is huge not only for Pakistan as a country but the entire region as a whole. The ‘developmental’ projects that are part of the CPEC carry the risk of increasing flooding, soil erosion, water scarcity and deforestation in all the affected areas, making the entire human habitat and wildlife vulnerable and subjecting them to unprecedented risks. One wonders if the Pakistani leaders who signed the CPEC with China did ever take into account the environmental costs of these massive projects.

Given the current trends, the CPEC – North Indus River Cascade is particularly destined to cast more dissonance between the three immediate neighbours who have hitherto failed to achieve good relations. Apart from the strategic implications that the CPEC has for the countries involved in it, it is imperative that the environmental damage it is causing to a region that is both geologically sensitive and seismically active is duly recognized. Constituting the Himalayan ranges and the ancient river basins such as the Indus, any permanent tampering to the structures and the natural formations in this zone could have massive impact on the entire population, not just human but other species as well.

At a time when the world is increasingly getting conscious of its climate change commitments and countries pledging their goals, one cannot ignore the fact that China is trying to pass the buck of its fossil fueled emissions to other countries by engaging in endeavours such as the BRI & the CPEC which are falsely projected as being the pathways to prosperity.