They are declared personae non gratae for their misdeeds 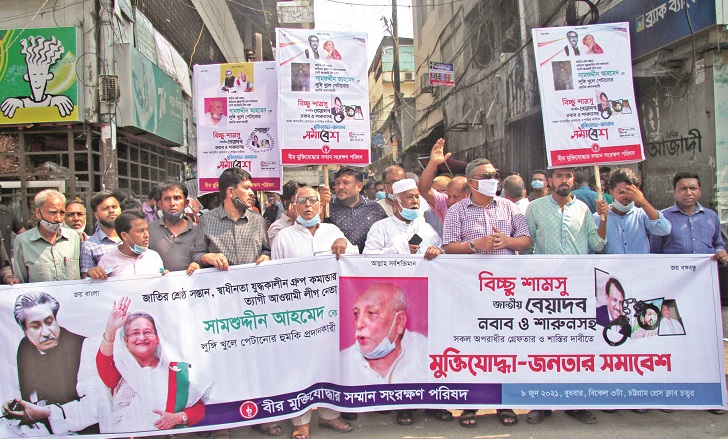 They have also declared Shamsul, his brother Nawab Chowdhury and son Sharun personae non gratae for their wrongdoings, including the cruel act towards the best son of the soil.

They made the demands from several human chains and rallies formed under the banner of ‘Bir Muktijoddha Samman Sangrakkhan Parishad’ at different parts of the port city on Wednesday afternoon.

Aggrieved with the threat and the misrule of Shamsul and his family, people irrespective of ages and different organisations, including Bangladesh Muktijoddha Paribarborgo, joined the protest programmes in processions.

The Parishad was scheduled to arrange its protest programme in front of the Chattogram Press Club.

But, police did not allow them to hold their programme there as another organisation reportedly patronised by Shamsul and his family announced to hold a programme at the same place.

The organisation under the patronage of Shamsul held a meeting later blocking the road near the press club.

The Parishad leaders formed their first human chain at Cheragi Pahar intersection. As they wanted to move towards the press club, police barred them.

In his speech, freedom fighter Shamsuddin said they were scheduled to arrange their peaceful programme in front of the press club at 3:00pm.

But, after knowing about the programme, casino king, Yaba trader, land grabber and corrupt Whip Shamsul and his son hatched a conspiracy so that police did not allow them anywhere. “As we started talking against their misdeeds, Shamsul, his brother Nawab and son Sharun threatened to undress me and keep me away from the politics in Patiya,” he said.

“We lodge strong protest against the threat,” said Shamsuddin.

He said the flag the freedom fighters earned through their lives and blood cannot be given to a corrupt person like Shamsul. “We fought during the Liberation War. We don’t have much strength in the body now. But, we can’t accept any insult,” he said.

Prime Minister Sheikh Hasina allocated Tk 5,000 crore for different projects in Patiya. But, Shamsul and his family members realised 20 per cent from them, alleged Tayub.

He urged the Prime Minister to investigate Shamsul’s corruption through the Anti-Corruption Commission.

He also announced that they will continue their protest programme until actions are taken against them.

He said police did not allow them to hold the programme in front of the Chattogram Press Club following influence of someone.

Jasim protested the act of insulting a veteran freedom fighter who risked his life for independence of the country.

Mentionable, different organisations also protested the threat issued to the freedom fighter at different parts of the country earlier.

Bangladesh Muktijuddho Mancha demanded arrest of the whip and his son Sharun and gave an ultimatum.

They vowed to wage a tougher movement across the country if their demands are not met immediately.

Hailing from various parts of the country, hundreds of leaders and activists of the organisation and children of freedom fighters flocked to the pavement of Raju Sculpture at the TSC in Dhaka University and formed a human chain to press home their demands.

They alleged that people like Whip Shamsul and his son Sharun are tarnishing the image of the Awami League government which is lauded for achieving unprecedented socioeconomic success.

Bangladesh is being run by pro-liberation government right now. Prime Minister Sheikh Hasina has been working relentlessly for the welfare of the country and its people, they said.

People like Shamsul having BNP-Jamaat background are jeopardising the success of Prime Minister Sheikh Hasina, they alleged.

The gang and their cohorts have created a reign of terror in Patiya, a hotspot of killing and persecution of freedom fighters and other innocent people, they opined.

Their misdeeds came into focus again after involvement of Sharun in the death of banker Abul Morshed Chowdhury surfaced and Shamsul talked in favour of gambling amid the countrywide anti-gambling drives.

Mentionable, Shamsuddin Ahmed was president of Chattogram South district Chhatra League in 1972 and general secretary of Patiya Awami League after 1975.

Later, he was elected president of upazila Awami League and continued with the post till 2010. He was commander of upazila freedom fighters’ council till 2013.