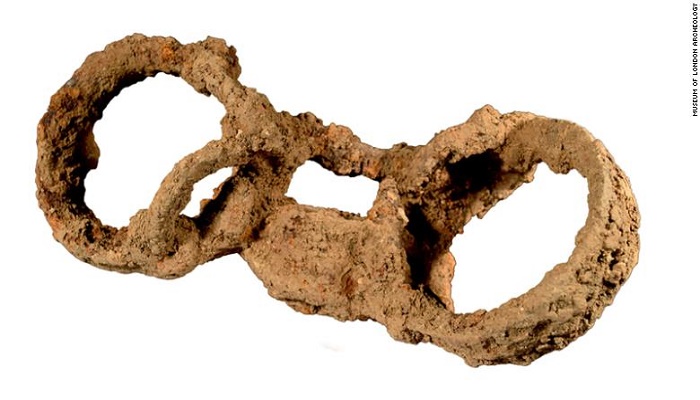 Archeologists working in central England have found a shackled skeleton which, they say, provides physical evidence that slavery was practiced in Roman Britain.

The adult male was buried in a ditch with iron fetters locked around his ankles, Museum of London Archaeology (MOLA) said Monday.

The remains were found by builders working on a home extension in Great Casterton, in the central English county of Rutland, archaeologists from MOLA said, adding that this is the first time this kind of restraint has been found on a skeleton from Roman Britain.

Radiocarbon dating has revealed that the remains date from between 226 and 427 AD, according to the press release. The Romans occupied large parts of Great Britain between 43 BCE and around 410 AD.

"We do know that the Roman Empire relied quite heavily on slave labor. It underpinned much of the empire throughout history. And it was true of Roman Britain as well. We have lots of literary evidence from wood, writing tablets and stone carvings," said Chris Chinnock, a human osteologist, or bone specialist, at MOLA.

"What we haven't found before is the physical remains of a person we think, we strongly suspect, could have been a slave."

Chinnock said that it was impossible to definitively say that the man was enslaved but he represented the best candidate found in the UK.

In addition to fetters, which are of a particular type associated with slavery elsewhere in the Roman Empire, the man was buried slightly on his right side, with his left side and arm slightly higher up a slope, which suggests he was disposed of in a ditch rather than buried in a proper grave, said MOLA.

The individual was also buried just 200 feet from a Roman cemetery, which was "perhaps a conscious effort to separate or distinguish them from the people buried within the cemetery," according to the press release.

Given that the shackles were a complex piece of iron work and would have been an expensive object to manufacture or purchase, Chinnock said that it was unlikely it would have been easily discarded.

"For living wearers, shackles were both a form of imprisonment and a method of punishment, a source of discomfort, pain and stigma which may have left scars even after they had been removed," said Michael Marshall, finds specialist at MOLA, in the statement.

"However, the discovery of shackles in a burial suggests that they may have been used to exert power over dead bodies as well as the living, hinting that some of the symbolic consequences of imprisonment and slavery could extend even beyond death."

A small number of burials dating from Roman Britain have heavy iron rings around the limbs, but they may have been forged onto the bodies and probably wouldn't have been able to be worn during an individual's life, added the team.

According to the statement, some written sources from the time mention that the dead were restrained to stop them "from rising and influencing the living."

Detailed examination of the skeleton showed the man led a "physically demanding life," the archeologists said.

"A bony spur on one of the upper leg bones may have been caused by a traumatic event, perhaps a fall or blow to the hip, or else a life filled with excessive or repetitive physical activity," the statement said. "However, this injury had healed by the time he had died, and the cause of his death remains unknown."