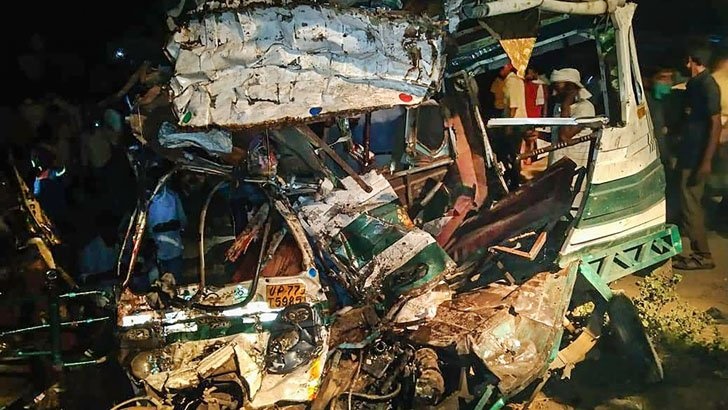 Seventeen people were killed and around 20 sustained injuries when a bus they were travelling in collided with a three-wheeler light carriage truck at Sachendi locality in Uttar Pradesh’s Kanpur of India on Tuesday. The injured have been taken to the Lala Lajpat Rai Hospital, said police.

Kanpur Outer’s superintendent of police Ashtbhuja Prasad Singh said a speeding bus hit a loader, which fell on the other side of the highway, while the bus overturned and fell into a ditch. Inspector General (Kanpur) Mohit Aggarwal said while 16 were brought dead to the hospital, one died during treatment.

Prime Minister Narendra Modi expressed grief over the accident while chief minister Yogi Adityanath has announced an ex-gratia amount of ₹ 2 lakh each to the next of kin of the deceased and ordered a probe.

The collision was so strong that almost all passengers of the bus got trapped and sustained serious injuries, the SP said.