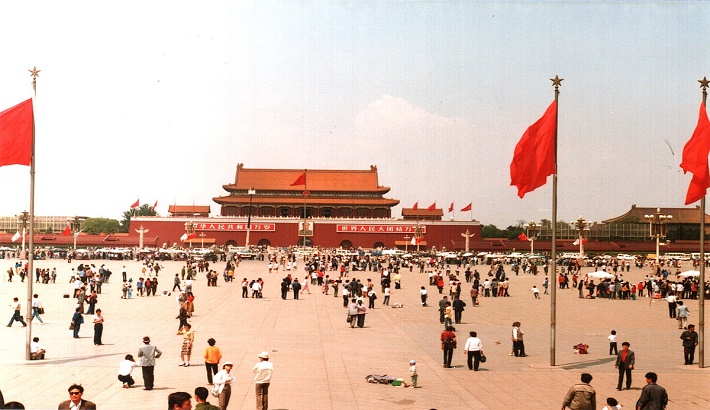 A Chinese troll army flooded the internet with a torrent of vile claims that the Queen had died on the anniversary of the Tiananmen Square massacre.

Thousands of posts from Chinese bot accounts responded to the British embassy in Beijing with messages saying ‘R.I.P the Queen’ to distract from commemorations of those killed during the protests 32 years ago.

The deluge of fake posts came in response to commemorations to those who lost their lives during the massacre in 1989 from the embassy and a British diplomat.

The embassy posted a picture of a candle - a traditional symbol of protest against the brutal military crackdown on protesters.

The post was removed from Chinese social media within 20 minutes - and similar posts on Twitter were then flooded with misinformation by an army of bots with names in mandarin, written by somebody who does not appear to be a native English speaker.

One Tweet, posted word-for-word by dozens of different accounts, read: ‘I hereby pay my most solemn tribute to Her Majesty Elizabeth II, by the Grace of God, of the Kingdom of England and of her other realms and territories Queen, My sincere condolences to the Royal Family. May her soul rest in eternal peace.’

Christina Scott, the Deputy Head of Mission at the British embassy in Beijing, had a similar post flooded with vile lies about the Queen.

She tweeted: ‘Today @ukinchina posted this [a flickering candle] on Chinese social media in memory of all who lost their lives in and near Tiananmen Square, 32 years ago. It was censored within 20 minutes.’

She added that the post had been deleted ‘five minutes slower than last year’ as it was ‘clearly a busy day for the censors’.

One response to her post, from an account which has shared numerous examples of what appears to be pro-CCP propaganda, said: ‘I am glad that Prince Charles can finally become king of England.’

A recent investigation by the Oxford Internet Institute at Oxford University and the Associated Press found that an army of fake accounts has powered China’s rise on social media.

Thousands of bot accounts - many of them impersonating British citizens - pushed Chinese government content which received more than 16,000 retweets and replies before it was removed from the social media platform, the investigation found.

The investigation identified 26,879 accounts which had shared posts from Chinese diplomats or state media almost 200,000 times before being suspended.

The researchers were unable to determine whether the accounts were sponsored by the Chinese government, although this was denied by China’s Ministry of Foreign Affairs. Twitter said it would investigate any potential link.

As troops closed the cordon around Tiananmen Square, a cohort of student die-hards refused to leave until persuaded to by other leaders, including Taiwanese singer Hou Dejian.

City hospitals filled up with the dead and wounded. Hundreds, possibly thousands, were believed killed in Beijing and other cities during the night and in the ensuing roundup of those accused of related crimes.

There has never been an official accounting of the casualties.

The army's crackdown was widely condemned in the West, as well as in Hong Kong, then a British colony, where supporters organised missions to bring those wanted by authorities to safety.

On June 13, Beijing police issued a most-wanted notice for 21 student leaders, 14 of whom were arrested.

No. 1 on the list was 20-year-old Wang Dan, who was subsequently given a four-year prison sentence but released early.

By 1992, most of China's overseas relationships had been restored and Deng used his remaining personal influence to relaunch economic reforms that ushered in a new era of growth while the party ruthlessly enforced its monopoly on political power.

The protests, first labeled a 'counterrevolutionary riot,' are now merely referred to as 'political turmoil,' when they are referred to at all, as the party tries to suppress all memory of them having occurred.

The government has never expressed regret over the killings and rejected all calls for an investigation, leaving the protests an open wound in Chinese history.

Asked if he had any comment about the anniversary at a briefing last year, defence ministry spokesman Wu Qian said he didn't agree with the use of the word 'suppression' to describe the military action, but offered no alternative.

'I think over the 30 years, what we have achieved in reform and opening up and development has already answered your question,' Qian said.