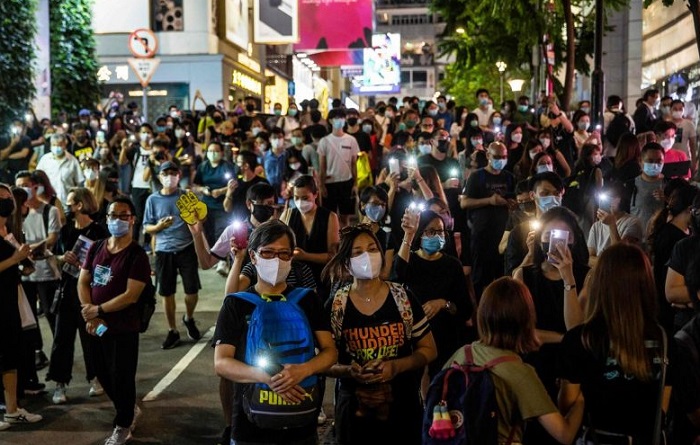 HONG KONG - Unlike in the past, when activities were loud and public, people in the city commemorated the Tiananmen Square crackdown in Beijing 32 years ago on a more muted but still defiant note amid heightened police presence and arrests.

Police on Friday (June 4) deployed thousands of officers to patrol the streets, sealed off large parts of the traditional vigil venue at Victoria Park and made at least two arrests.

Despite a ban, ample warnings and heavy police presence in Victoria Park, hundreds turned up in defiance, circling outside the police cordon before 8pm.

Minutes before the planned moment of silence at 8.09pm - representing 1989, the year of the event - to mark the violent crackdown by the People’s Liberation Army on pro-democracy demonstrators in Beijing, police tried to disperse crowds that circled the park as they tried to turn on their mobile phone flashlights or carried candles.

Others strolled around, blending into passers-by around the popular shopping malls in Causeway Bay, and leaving on their mobile phone flashlights till 9pm or later.

Among those dotting the walkways of Sogo shopping mall was designer James Wong, 30.

“In the past, people didn’t think commemorating the Tiananmen Square massacre, where students stood up to the communist rule, was meaningful but now we are personally feeling the impact of such rule.

“In the past it would have been a day where only a smaller group remembered but now more people will be aware and it is our duty to continue to air the truth,” said Mr Wong.

People also did similar acts in other districts, including Mong Kok and Tsim Sha Tsui.

The police had, for a second year running, rejected an application from the Hong Kong Alliance in Support of Patriotic Democratic Movements of China to hold the candlelight vigil on June 4, citing public order and health risks.

The vigil, held by the alliance for 30 years, was banned for the first time last year but thousands defied warnings and rallied. Denouncing China, they called for the end of one-party rule on the mainland - now a breach of a tough national security law passed last year.

In anticipation of assemblies, the police cordoned off about half of Victoria Park.

Describing the move as “the most effective measure”, Senior Superintendent Liauw Ka Kei said: “The Hong Kong police will use whatever measures in order to maintain public order and public safety.

“For all the orderly as well as lawful events held in Hong Kong, the police will try our best to facilitate.

“No matter what event it is, if it is unlawful, police have no other options but to enforce according to the law,” he added.

Detective Senior Superintendent Terry Law told the media on Friday that the police arrested two people in the early morning - Cheung, 20, who is a food delivery worker and a 36-year-old woman, Chow. They were arrested on suspicion of advertising or publicising via social media an unauthorised assembly under section 17A of the Public Order Ordinance.

The woman in custody is Chow Hang Tung, the vice-chairman of the alliance, which for the past 30 years has organised the annual candlelight vigil to remember those killed in 1989.

Chow said previously that she would go to Victoria Park on Friday evening in a personal capacity to mourn the Tiananmen victims.

Under the Ordinance, anyone who takes part in an unauthorised assembly can be jailed up for to five years, while those who advertise or publicise an illegal assembly face a maximum of 12 years in prison.

Commemorations this year are particularly sensitive as the Chinese Communist Party celebrates its 100th anniversary on July 1.

In Macau, the vigil was also banned for a second year. It is the only other Chinese territory where people can openly mark the day, although on a much smaller scale compared with Hong Kong.

At Holy Cross Church in Sai Wan Ho, one of seven Catholic churches that conducted an annual mass in the evening for the Tiananmen victims, dozens were outside the main entrance as all 300 or so seats were filled.

One of those who managed to get in was a local who wanted to be known as Ms Sze. The 26-year-old had attended five candlelight vigils held at Victoria Park in previous years.

"I believe we need to find a day to properly commemorate the people who died," she said, adding that she felt the reasons given by authorities were ridiculous.

Still, Ms Sze was optimistic, saying that the vigil ban "pushes people to find different and creative ways to remember the event and, in turn, let activities blossom everywhere".

Earlier in the day, the student union of the University of Hong Kong paid tribute to those who died in the crackdown, with people lining up to lay flowers at the Pillar of Shame sculpture on campus.

Many Hong Kong pro-democracy figures who have gone into self-exile plan to lead their own commemoration ceremonies overseas.

"I hope everyone can all pass on the history and truth of the June 4 massacre and the democratic movement in 1989 to the next generation by safe means," activist Nathan Law, a former student leader who fled to Britain last year, wrote on Facebook.