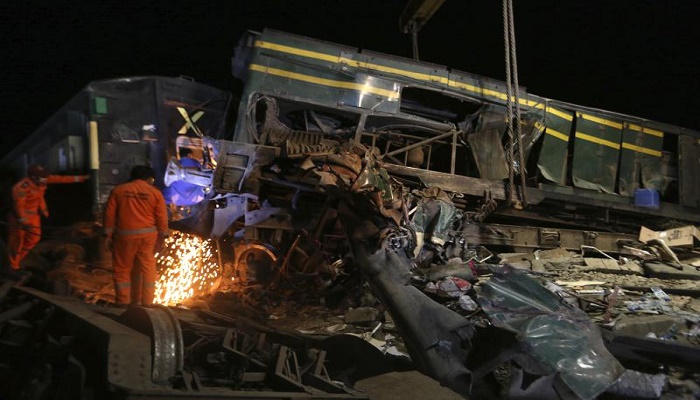 Pakistani engineers Tuesday combed the mangled wreckage of two trains that collided in a remote farming region, an accident that killed dozens and highlighted huge safety problems on the nation's dilapidated rail network.

At least 63 people were killed early Monday when a high-speed passenger train knifed through carriages of another express that had derailed minutes earlier near Daharki in Sindh province.

Army and civil engineers have cleared much of the wreckage of carriages crushed like tin cans in the collision, and welders were finalising repairs to the damaged rails.

A heavy stench of diesel, sweat and blood hung over the scene, with workers saying bodies were still being pulled overnight from mangled carriages.

"This is the most colossal accident I have seen in about 10 years of service," railway engineer Jahan Zeb told AFP, his eyes puffy from sleeplessness.

The Millat Express was heading from Karachi to Sargodha when it derailed, its carriages strewn over the tracks as the Sir Syed Express from Rawalpindi arrived minutes later in the opposite direction, smashing into it.

The accident has reignited debate about the parlous state of Pakistan's public transport system -- particularly a rail network that has seen little investment in decades.

It is not known what caused the Millat Express to jump its tracks, but Interior Minister Sheikh Rashid -- a former railways minister -- described that section of the line as "a shambles", while current minister Azam Swati called it "really dangerous".

Pakistan Railways said Tuesday that 63 people had died in the accident, issuing two lists that named 51 victims and marked 12 others as unidentified.

They ranged from a months-old infant to a woman who was 81.

Khan Mohammad, station master at nearby Reti junction, said more lives could have been saved if they had just a few more minutes after the derailment.

"I saw a six- or seven-year-old girl trapped underneath the locomotive, her knee stuck in the track," he said.

"We somehow rescued her, and she was miraculously alive."

But then the oncoming train hit.

"If there had been a delay of about 10 minutes, this accident could have been averted," he said.

The double accident happened around 3:30 am (2230 GMT) when most of the 1,200 passengers aboard the two trains would have been dozing.