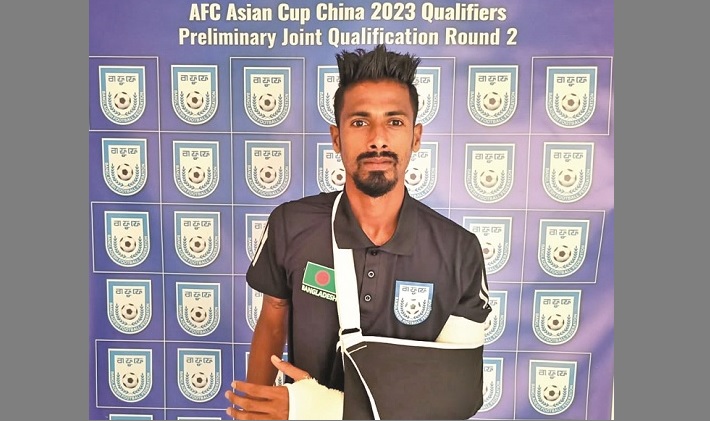 National midfielder Sohel Rana, who has been ruled out from the squad for FIFA, AFC joint qualifiers due to a serious arm injury, will return from Doha to Dhaka Tuesday.

He will be out of the field for the next four weeks. Sohel missed Bangladesh’s last two matches against India and Oman. The veteran midfielder got injured in the first half of their first match against Afghanistan on Thursday. Later, another midfielder Manik Hossain Molla came on his place in the second half.

“I’ll not take part in the matches against India and Oman. I got injured during the match against Afghanistan. The doctor suggested me for taking complete bed rest for three to four weeks. Hopefully, Bangladesh will give their best in the games. Please pray for us,” Sohel told the reporters on Monday.

Though Sohel Rana’s departure put Bangladesh in an uncomfortable situation, but head coach Jamie Day said other players would get chances to prove their worth in his absence.

“We are disappointed to lose Sohel Rana for the next two games with the injury to his arms. He has been a good player and keeps in faith for the national team. But he gives someone else the opportunity to step in and play for the national team and to show his capability for the international level,” he added.