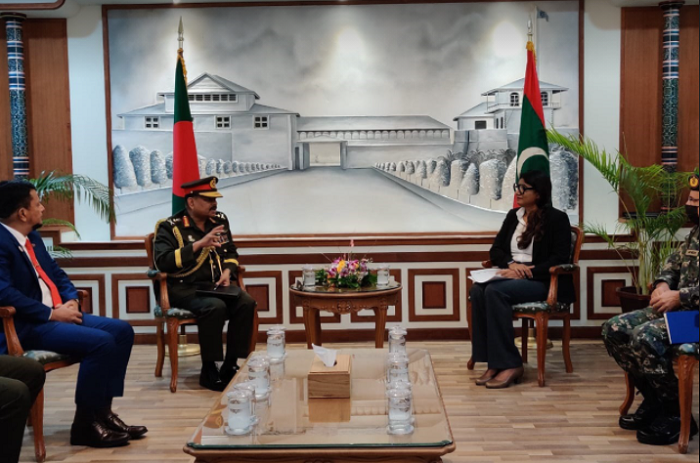 Chief of Army Staff (CAS) General Aziz Ahmed returned home from Maldives on Monday upon completion of his official visit at the invitation of Chief of Defence Force of Maldives Major General Abdulla Shamaal.

The meeting discussed ways to further strengthen mutual cooperation and good relations between the two countries.

Mariya Ahmed Didi gratefully remembers the contribution of Bangladeshi citizens living in the Maldives in various fields. She also discussed the possibility of how the country could benefit through an organization like the Bangladesh Machine Tools Factory (BMTF) run by the Bangladesh Army.

Later, General Aziz Ahmed attended a bilateral meeting with the Chief of Defence Force of Maldives Major General Abdulla Shamaal and other senior officials at the Maldives Defence Forces Headquarters.

The meeting also discussed in detail issues related to various bilateral military interests. During the meeting, a briefing was given to General Aziz Ahmed on the organization and activities of the Maldives Defence Force.

Both the Maldivian Defence Minister and the Chief of Defence Forces expressed interest in sending troops to Bangladesh in various higher military educational institutions including Armed Forces Medical College (AFMC) and Military Institute of Science and Technology (MIST) to train members of the Maldivian Armed Forces. They hoped that the Bangladesh Army would respond positively in this regard. This would further strengthen the military ties between the two countries. 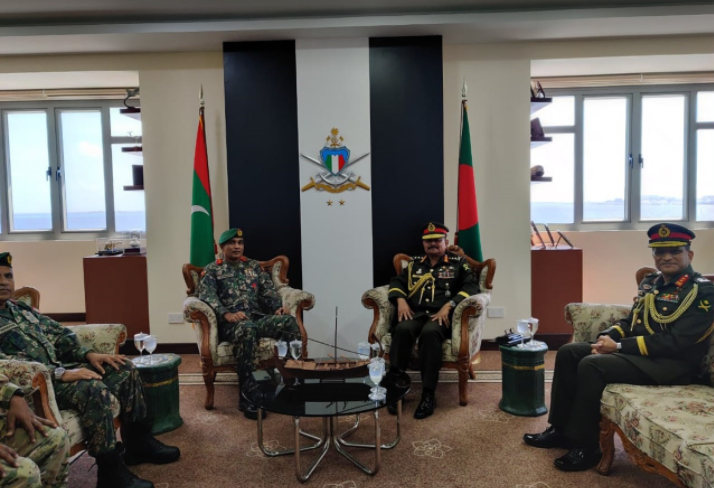 Discussions at various levels have revealed that the Maldivian government has undertaken an airstrip construction project with significant facilities on their ‘Kadhdhoo’ island and during their current visit, they have held discussions with expert engineers of the Bangladesh Army.

General Aziz Ahmed thinks that there is ample opportunity to provide necessary construction assistance through the Engineer Construction Brigade of the Bangladesh Army for the implementation of this mega project.

Bangladesh’s shipping lines are also able to provide full support in transporting construction materials from Bangladesh. However, detailed discussions and visits are needed between the two countries in this regard. 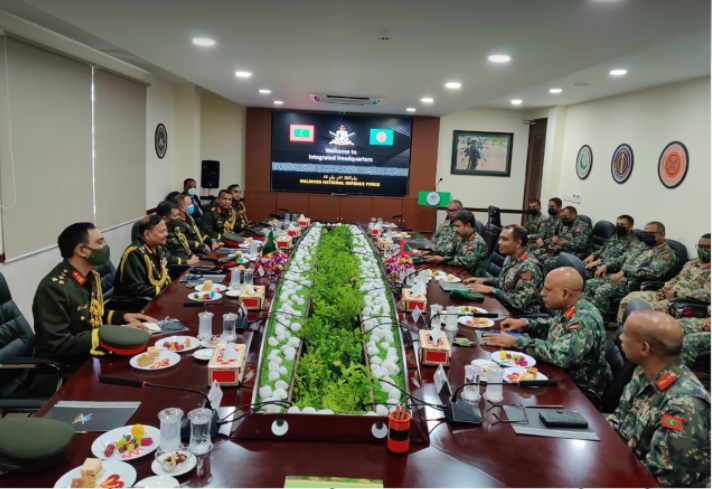 On behalf of the High Commission, Chief of Army Staff General Aziz Ahmed was given a briefing on issues of mutual interest between Maldives and Bangladesh.

Apart from the Maldivian and Bangladeshi armies, the visit is expected to further strengthen the friendly diplomatic relations between the two countries. During the visit to the Maldives, General Aziz Ahmed led a nine-member army team.