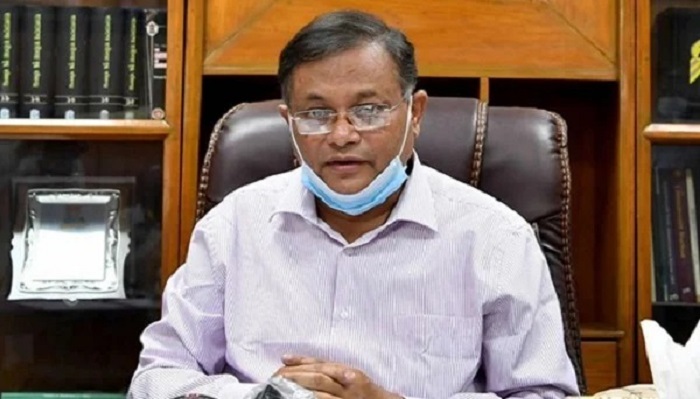 Information and Broadcasting Minister Dr Hasan Mahmud said both the ruling party and the opposition should be in favour of the Liberation War.

“After 50 years of independence in any country, those who were against its independence cannot do politics,” he told reporters after placing a wreath at the portrait of Father of the Nation Bangabandhu Sheikh Mujibur Rahman at Dhanmondi No. 32 in the capital this morning.

On behalf of the ruling Awami League, AL leaders placed the wreath at the portrait of Bangabandhu, marking the historic Six-Point Day.
Hasan, also the AL joint general secretary, said: “Politics of our country should be such that both the ruling and opposition parties are in favour the Liberation War.”

He said it is a matter of regret that even after 50 years of the independence, the anti-liberation forces are still doing politics in the country.

A big political party like BNP is doing politics building a collision with the anti-liberation forces, the AL joint general secretary said.

Highlighting the context of historic Six-Point Demand, Hasan said Father of the Nation Bangabandhu Sheikh Mujibur Rahman declared the Six Points in 1966 to mobilise Bangalees to get them ready mentally for independence.

He said people waged movement and joined the 1969 mass uprising and later the 1970 election was held on the basis of the Six-Point Demand, the charter of Bangalees’ freedom.

When the Pakistani ruling party did not hand over power to the Awami League after the 1970 election, Bangabandhu called for independence, the information minister said.

Bangladesh achieved independence after a long struggle and Liberation War, he said.

Soon after the creation of Pakistan, Hasan said, Bangabandhu felt that the Bangalees would never be liberated within the structure of this Pakistan state, thus he planned for the Bangladesh’s independence.

Recalling the history of the country’s independence, the AL joint general secretary said on the 53rd birthday of Bangabandhu in 1973, Comrade Moni Singh in his speech stated that Bangabandhu wrote a letter to him (Moni Singh) in 1951 mentioning he (Bangabandhu) planned for the independence of the whole Bengal and whether he would stay with the plan.

Bangabandhu knew the appropriate timing of presenting issues before the nation the declaration of the charter of Bangalees’ liberation through the historic six points was a unique step towards the country’s independence.