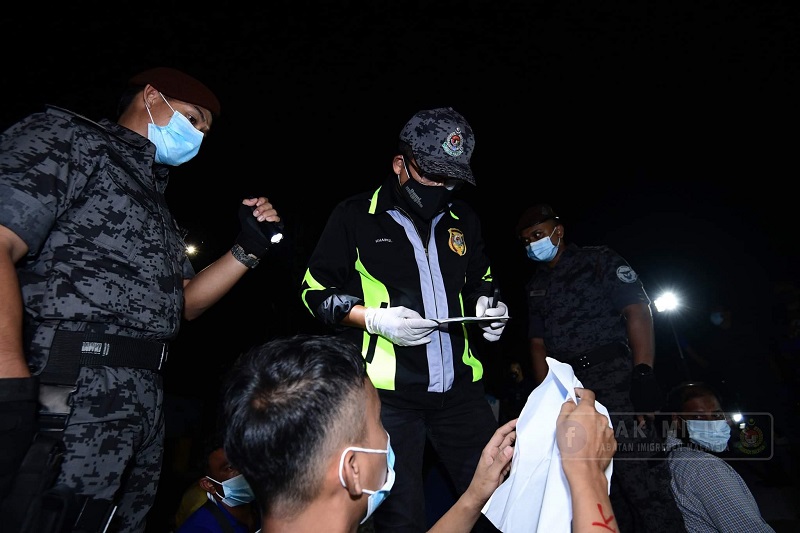 The Immigration Department of Malaysia nabbed 156 expatriates, including 62  Bangladeshis, from a construction site in Cyberjaya city in the country during an operation on Sunday night.

According to the report, the integrated operation was conducted at 11:00pm on Sunday night when some 202 immigrants from Indonesia, Bangladesh, Pakistan, Myanmar and India, including 12 women and two children were checked.

Immigration Department director-general said those checked range in age from below 4 to 50 years and 156 of them, including 62 Bangladeshis, 42 Indonesians, 29 from Myanmar, 20 from Nepal, and one from Pakistan and one from India, were detained.

They were detained for not having valid travel and identification documents and they were taken to the Immigration Department’s screening centre in Putrajaya for further action, said Khairul Dzaimee.

He said the raid on the settlement that has access to water supply and electricity through illegal connections, was carried out in collaboration with several enforcement agencies, including the police, the Malaysian Civil Defence Force and the National Registration Department, after three months of intelligence.

“This illegal settlement has the potential of spreading Covid-19 infections as it fails to comply with the stipulated standard operating procedures under the movement control order (MCO),” Immigration Department director-general said while briefing reporters after the operation.

When asked, he denied allegations that the Immigration Department only took action against illegal immigrants, but not against their employers.