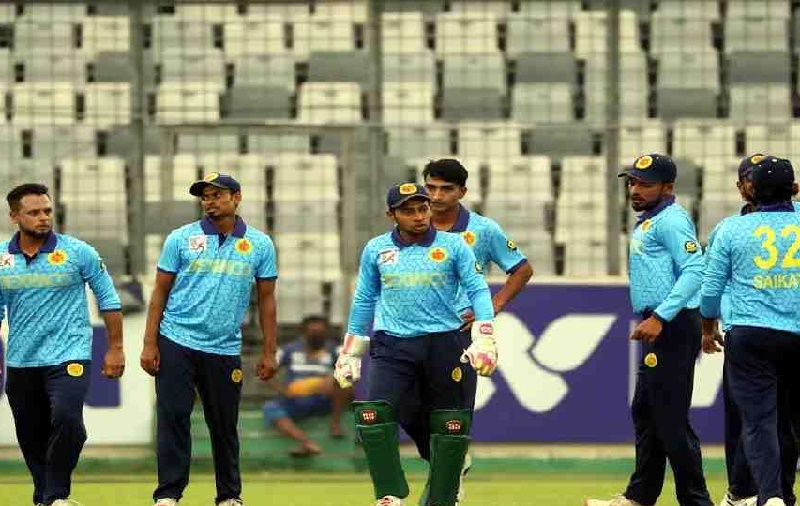 Imtiaz Hossain hit 66 off 46 balls with six fours and three sixes to guide Khelaghar to 164 for six in 20 overs. Kharghar had won the toss and opted to bat first.

To chase down the target of 165, Abahani needed to score 48 runs in the last five overs with six wickets in hand.

But one of the strongest teams in the league manage 39 runs and lost the game nine runs losing only one wicket off the last ball of the game.

Two of the last five overs bowled by Khaled Ahmed. He conceded only 12 runs and bagged the wicket of Mosaddek Hossain who was Abahani’s biggest hope to seal the game.

Along with Mosaddek, Afif Hossain was at the wicket in the death overs but failed to impress. Afif faced 16 of the last 30 balls and scored 21 runs while playing the other 14 balls, Mosaddek added 17 runs. Abahani managed only two fours and one six in the last five overs.

Mohammad Naim and Najmul Hossain Shanto were the best batsmen for Abahani in this game. Both of them scored 49 each but failed to continue on a good run. Mosaddek fell prey to Khaled off the last ball for 21 while Afif remained unbeaten for 22.

For Khelaghar, Rony Chowdhury and Khaled scalped two wickets each while Rafsan Al Mahamud bagged one.

Earlier, Imtiaz’s 66 guided Khelghar to 164 for six in 20 overs. Mehidy Hasan Miraz was the second-highest runs getter for Khelaghar scoring 33.

For Abahani, Arafat Sunny and Mosaddek took two wickets each.

It was the first defeat of Abahani in this league. Before this game, they were at the top of the table with three wins in three games.

Saif Hassan hit 50 for Doleshwar with three fours and four sixes to guide them to a comfortable victory while Farhad Reza also played a vital role hitting 27 off 11 balls with two fours and two sixes.

Myshukur Rahaman was the hero of Brothers, who hit 68 off 48 balls with four fours and as many sixes to help his team post a challenging total of 139 runs for five wickets. In reply, Anisul Islam Emon hit 64 for DOHS, but they fell short two runs, ending up on 137 for five in 20 overs.