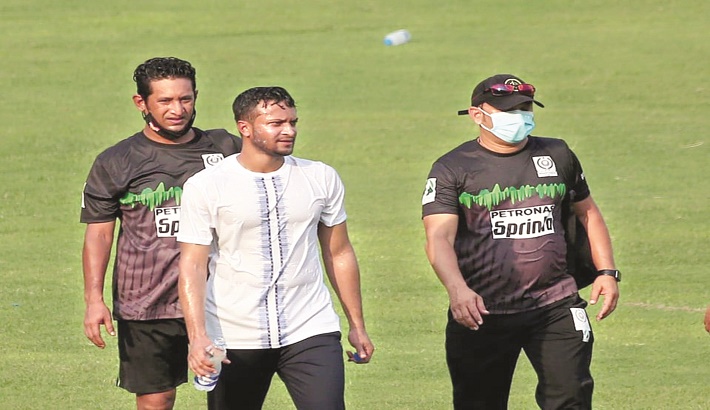 A Mohammedan Sporting Club official said on Sunday that they’re not losing their sleep regarding the potential breach of the Bio-Security Environment in place for Bangabandhu Dhaka Premier Division T20 League.

“We haven’t received any letter from CCDM regarding it (breaching DPL bio-bubble protocol),” an MSC official told The Daily Sun, adding that they’re not fully sure about the members of the committee which is in place to deal with these kinds of issues.

CCDM didn’t take long to announce their stance against MSC after the incident came under their notice.

Before the start of the tournament, BCB announced that they will enforce heavy punishment like a fine, ban or point deduction on DPL teams if they fail to follow bio-bubble protocols for which they are spending around Tk seven crore.

The MSC official added that they’re not sure why they are at the receiving end from BCB as they didn’t make any compromise in this regard.

“The two net bowlers, who joined Shakib from his academy during his individual practice session on Friday, completed their Covid test and were allowed only after receiving Covid-19 clearance following negative results,” he said.

“We can’t take the liability of the fan but we have seen he was maintaining required distance from Shakib but his arrival was certainly surprising for us as well,” he said, adding that they’re not sure why it (the arrival of the fan inside the bubble area) won’t be termed as a security lapse from BCB’s perspective as security of the board was expected to look after such matter.

BCB is yet to appoint a replacement for late Major Md. Hussain Imam (retd), their former security head after his unexpected demise last year.

Meanwhile, the fourth round of the ongoing DPL starts today at three different venues after all the previous two round matches took place at the Sher-e-Bangla National Stadium.

The scheduled matches were earlier halted on June 1 due to heavy rain that eventually caused waterlogging at the two venues of BKSP and prompted CCDM to arrange three games on each day at the home of cricket for four consecutive days as they are expected to finish the tournament by June 26.