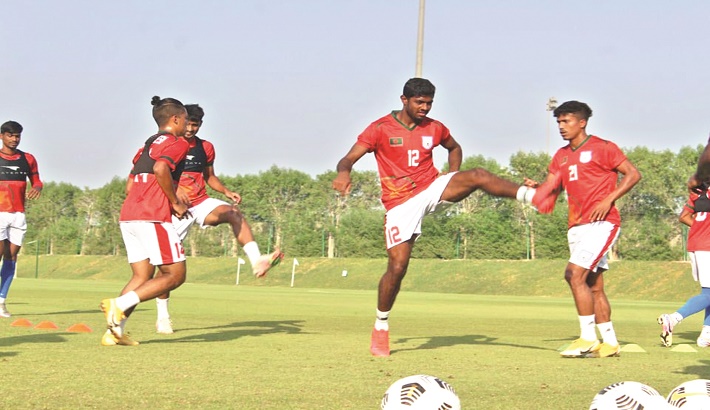 Bangladesh national football team will be eyeing to end their 22 years winless streak against India when they face their South Asian rivals in their penultimate Group E match of the joint qualifiers round two for FIFA World Cup 2022 and AFC Asian Cup 2023 in Doha, Qatar today.

The match will start at 08:00pm and it will be telecast live from Jassim Bin Hamad Stadium on T Sports.

Bangladesh failed to register a victory over their neighbouring country in a senior-level match in their last 12 attempts as they previously beat a senior Indian side in 1999 during a South Asian Games match.

However, that victory was just their second win against India overall as they lost 15 and drew 12 in 29 matches played against India at the senior level.

The men in red and green also failed to win their previous two matches against India before that tie and despite taking early leads in those matches, Bangladesh could only settle for draws in those matches in 2013 and 2014 respectively.

However, Bangladesh will have a brighter chance to change the scenario this time around as they came into the match after drawing 1-1 with Afghanistan in their previous match while India lost to Qatar 0-1 despite showing tremendous fight.

“We know the match against India is gonna be an extremely tough match. India ranked 80 places above us, they have shown in previous games that they have the quality to go forward and showed great balance and spirit in the last couple of games.

“We need to play our best if we want to gain anything from the match. Hopefully, we will perform well. If we don’t do that, we will be disappointed with the result,” he added.

Bangladesh are currently placed bottom in the five-team points table with two points from six matches while India are at fourth place with three points.

Although Bangladesh have lost the opportunity to make a move to the next round of FIFA World Cup qualification, they still have a chance to make a place in the Asian Cup and they need to beat India at any cost in order to seek a direct spot in round three of AFC Asian Cup 2023 qualifiers.

“It is a big and important match for us against India. We are all ready. I urge Bangladeshi fans in Qatar to come to the stadium and to support us. It will inspire us and we will be able to present a good result,” Bangladesh captain Jamal Bhuyan said.