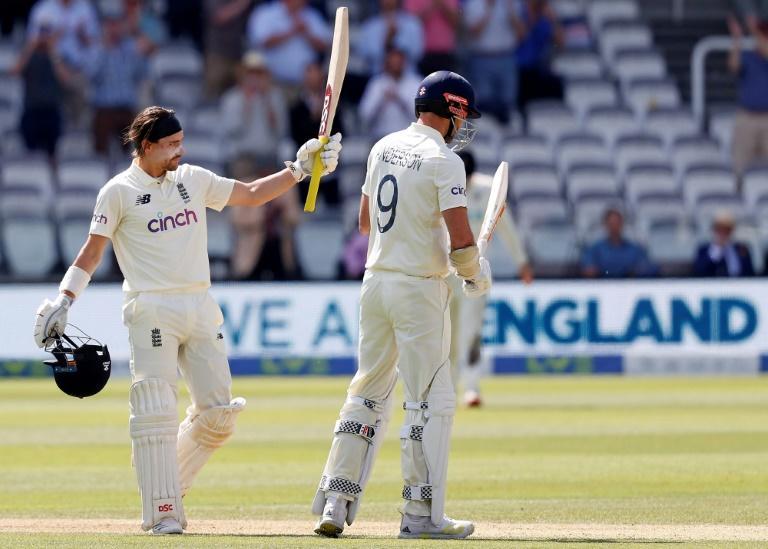 New Zealand were 62-2 in their second innings at stumps on the fourth day, a lead of 165 runs.

Ollie Robinson, continuing an impressive on-field debut, dismissed both fellow newcomer Devon Conway, fresh from his first-innings 200, and New Zealand captain Kane Williamson for a return of 2-8 in nine overs.

New Zealand, following Friday's total washout, damaged their hopes of going 1-0 up in this two-match series by twice reprieving Burns before the Surrey left-handed opener completed his third Test century.

England are without the injured Ben Stokes, a dynamic run-scorer, and have opted against selecting two attacking batsmen in Jos Buttler and Jonny Bairstow after their stints in the Indian Premier League.

Williamson, however, is unlikely to make a declaration that could give England a chance to win ahead of both next week's series climax at Edgbaston and New Zealand's appearance in the inaugural World Test Championship final against India later this month.

England captain Joe Root fell for 42 to the first ball of the day when he edged a fine delivery from the towering Kyle Jamieson to Ross Taylor at slip.

Southee then removed Dan Lawrence and debutant James Bracey for a duck apiece as England lost three wickets for no runs in 21 balls during a middle-order slump.

"We couldn't have asked for a better start, getting a quality batter in Root out first ball," Southee told reporters.

"But we knew there was going to be a counter-punch at some stage -- they (England) are too good a side just to roll over."

Burns had started a sunny day seemingly ideal for batting on 59 not out.

It took him a further 133 balls to score the 41 runs he required to get to three figures.

England, however, were grateful for the grit that earned Burns, dropped during England's 3-1 series loss in India this year, a coveted place on the Lord's honours board.

He also received a heartfelt round of applause in a match that marked the return of spectators to international cricket in England following the easing of last year's coronavirus restrictions.

"When you walk in that dressing room and see the board, it is nice to get up there," Burns who, recently became a father for the first time following the birth of his daughter Cora, told the BBC.

"My wife and daughter were here on Thursday and today. The daughter might be a good omen."

He added: It was really tough. I think they (New Zealand) bowled really well."

On 77, Burns ended up stranded yards down the pitch by left-arm spinner Mitchell Santner, but wicket-keeper BJ Watling, on his last tour before retirement, missed the easy stumping.

Then, 12 shy of the century, Burns edged Neil Wagner only for second-slip Southee to drop the catch.

Robinson, who had led England's attack with 4-75 on Wednesday only for that to be overshadowed by the re-emergence of his racist tweets, gave Burns sound support in a seventh-wicket stand of 63.

But the new ball brought Robinson's downfall for 42 when he top-edged a hook off Southee to fine leg.

Burns was 91 not out when No 11 James Anderson came in to bat.

The pair shared an entertaining stand of 52 before Southee had Burns, in sight of batting through the innings, caught behind. That ended a stay of nearly eight hours in which he faced 297 balls and hit 16 fours and a six.

Robinson's then had Conway playing on for 23 before, a ball after seeing an lbw reviewed in Williamson's favour, he successfully challenged a not-out decision to have the star batsman leg before for just one.