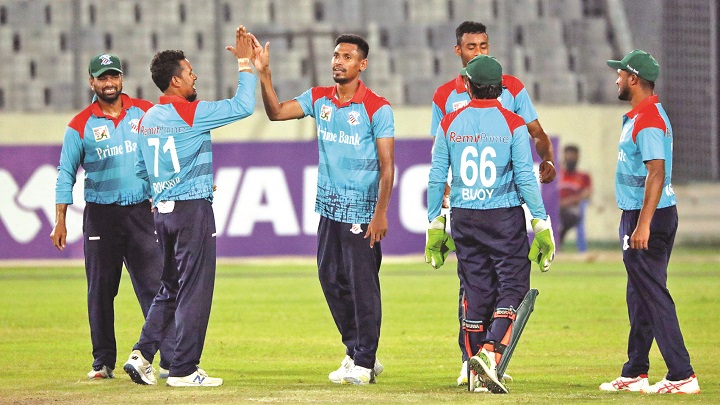 Both Abahani Limited and Mohammedan Sporting Club completed their third successive victory in the ongoing Bangabandhu Dhaka Premier Division T20 League after defeating their respective opponents in Dhaka on Saturday.

Meanwhile, Old DOHS earned their first win in the ongoing meet as they outclassed Partex Sporting Club by 10 wickets in the first match of the day.

Pacer Mustafizur Rahman claimed his second five-for in a T20 match as Prime Bank restricted Mohammedan to 150-8 in their stipulated overs after they opted to bat first.

Mustafizur, finishing with 5-22, also equalled his previous best T20 figure against New Zealand in the 2016 World T20 in India.

Mohammedan opener Pervez Hossain made the highest 50 off 38 balls while Shamsur Rahman and Shakib Al Hasan scored 33 and 20 runs respectively.

Mohammedan pacer duo Abu Jayed and Taskin Ahmed claimed three wickets each while Shakib took two wickets as Prime Bank were bowled out for 123 runs in 19.3 overs which gave Mohammedan continue their unbeaten run in the tournament.

Pacer Tanzim Hasan shone with the ball as he claimed 3-9 while left-arm spinner Arafat Sunny took two wickets as Abahani restricted Brothers to 101-5 in stipulated 11 overs after the league leaders opted to field first.

Mushfiqur Rahim and Mohammad Naim then scored unbeaten 37 and 36 runs respectively as Abahani raced towards the target 102-1 in 9.5 overs to complete another win in the meet.

In another rain-affected match, Partex made 77-4 in stipulated 15 overs before Old DOHS openers Anisul Islam and Rakin Ahmed made unbeaten 33 and 43 runs respectively to reach 78-0 in 11.3 overs to move to sixth place in the points table.

Former national pacer Shahadat Hossain, who was banned for slapping his teammate in 2019, returned to competitive cricket through this match as he represented Partex and bowled two wicketless overs.

Although BCB previously hinted that they might consider lifting his five-year ban after Shahadat made a request to them, it couldn’t be known whether he played with or without getting any written document from BCB.