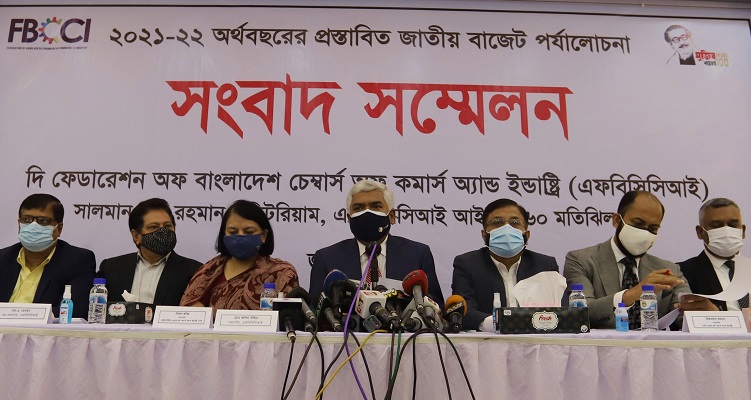 The Federation of Bangladesh Chambers of Commerce and Industries (FBCCI) has urged the government to meet the budget deficit from foreign sources and special local bonds instead of taking loans from domestic banks.

It has also advocated for whitening untaxed money for investment in the private sector.

Seeking the facilities for a limited time, it has said allowing this for an indefinite period will discourage genuine taxpayers.

In a post-budget press conference at its Motijheel office on Saturday, the apex trade body, however, expressed its happiness over the budget proposals in general and extended thanks to the government for formulating such a business-and-investment-friendly budget.

Speaking at the programme, FBCCI President Md Jashim Uddin said the proposed budget has a deficit of around Tk 2.14 lakh crore, which is 6.2 per cent of the GDP.

On this point, FBCCI president urged the government to meet the budget deficit from foreign sources and special local bonds instead of taking loans from local banks.

About the hike in advance income tax (AIT) in the proposed budget, he once again demanded removing the existing AIT for the interest of businesses.

Noting that the tax waiver privilege on software and IT facility sales has been revoked in the new budget, Jashim Uddin said the decision should be reviewed to make the IT sector flourish.

Apart from that, the apex organisation of businessmen urged the government to facilitate the import of river dredging machinery with a tax of 1 per cent in an effort to increase the navigability of rivers and expedite the implementation of the Delta Plan.

The FBCCI president applauded some initiatives proposed in the budget, which include focus on skills development, tax cut facility for companies with 10 per cent of employees from the third gender community, and others.