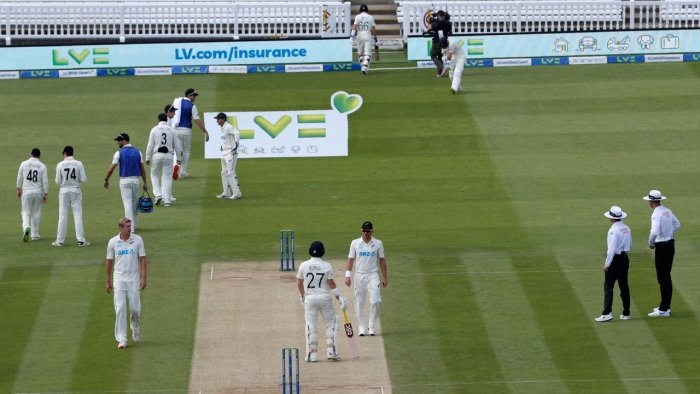 England captain Joe Root fell to the very first ball of the fourth day's play to spark a dramatic collapse in the first Test against New Zealand at Lord's on Saturday.

England, resuming on 111-2 after Friday's total washout, were 164-6 at lunch -- still 214 runs behind New Zealand's first innings 378 built on debutant Devon Conway's 200, the highest score by any batsman making their Test bow in England.

Kyle Jamieson got Root but Tim Southee did the bulk of the damage as England lost three middle-order wickets for no runs in 21 balls to be 140-6.

At lunch, the veteran seamer had miserly figures of 4-35 in 20 overs after removing both Dan Lawrence and debutant James Bracey for ducks in the first of this two-match series.

But left-handed opener Rory Burns was still there on 72 not out, albeit having scored just 13 runs in the session, after sharing a third-wicket stand of 93 with Root.

New Zealand were without left-arm spearhead Trent Boult, who only arrived in England on Friday following family leave.

But on a sunny day, seemingly ideal for batting, towering paceman Jamieson produced a brilliant first-up delivery, angling in and straightening, that Root, still on his overnight 42, edged low to Ross Taylor at first slip.

The umpires called for a review to check the catch but Root was already two-thirds of the way back to the pavilion when his dismissal was confirmed.

Ollie Pope hit several boundaries before he was plumb lbw to Southee for 32, although New Zealand, who face India in the inaugural World Test Championship final later this month, had to review a rare poor decision by umpire Michael Gough.

In a match that marks the return of spectators to international cricket in England after last season's Covid-19 restrictions, Southee was soon enjoying more applause against an England side missing the injured Ben Stokes and without wicketkeeper-batsmen Jos Buttler and Jonny Bairstow, both rested following their Indian Premier League stints.

And wicketkeeper Bracey then fell for the third duck of the innings, bowled between bat and pad by Southee.

One consolation for the left-hander was that Len Hutton and Graham Gooch, two of England's greatest batsmen, had both been out for nought in their first Test innings as well.