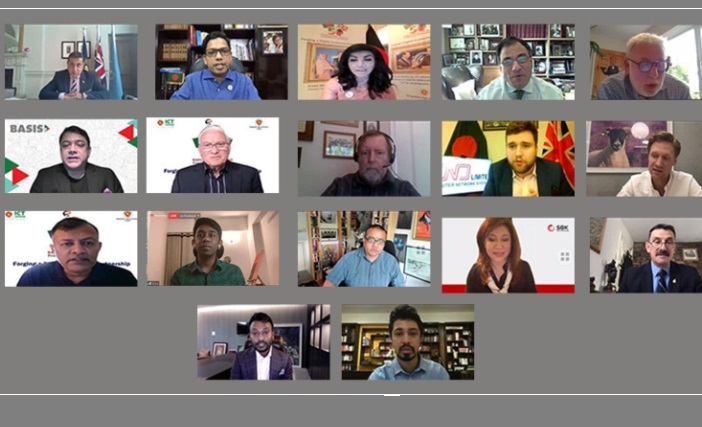 The government has launched its first ever Virtual IT Desk and B2B Connectivity Portal, the `Bangladesh IT Connect-UK’, at the Bangladesh High Commission in London to attract more FDI and create greater business connectivity between entrepreneurs and vendors from IT Industry in Bangladesh and the UK.

Developed by the LICT Project of Bangladesh Computer Council (BCC) under the ICT Division of the Government in collaboration with the London High Commission, the Virtual IT Desk and B2B Connectivity hub was inaugurated yesterday by State Minister for ICT, Zunaid Ahmed Palak with British Foreign, Commonwealth and Development Office Minister Lord Tariq Ahmad, at a high-profile B2B event tilted, “[email protected] : Forging a Digital Economy Partnership”, organized by Bangladesh High Commission, London in collaboration with the ICT Division of the Government as part of High Commission’s commemoration of 50 years of Bangladesh[1]UK diplomatic relations.

In his speech as Chief Guest, British Minister for South Asia, Commonwealth and the UN, Lord Ahmad pledged UK’s unremitting support and collaboration in promoting a knowledge and technology-based digital economy partnership.

He said: “Tech collaboration between the governments and the people of Bangladesh and the UK will take bilateral relations of the two countries into the next digital age”. He suggested establishing a close alliance between UK Higher Education institutions and Bangladesh’s IT industries for strengthening further the skill base of the IT sector of Bangladesh and enhancing IT businesses.

Speaking at the event as Guest of Honour, ICT Minister Zunaid Ahmed Palak said, “The virtual desk at the High Commission would help foster Bangladesh-UK trade and investments as well as knowledge partnerships in the technology and BPO sectors of both countries.”

“Under the dynamic stewardship of Prime Minister Sheikh Hasina, Bangladesh has been developing ICT infrastructure including 39 Hi-Tech/ IT Parks for foreign and local investors in its journey towards Digital Bangladesh and we invite UK IT companies to run their BPOs and businesses in 5 of the top state-of-the art Hi-Tech/IT Parks”, the Minister said.

High Commissioner Saida Muna Tasneem in her welcome remarks said, “Bangladesh High Commission London is proud to launch a Virtual IT Help Desk and a B2B IT connectivity portal connecting IT industry of Bangladesh with that of the UK, on the occasion of 50 years of our historic diplomatic relations that was pioneered since 08 January 1972 by Father of the Nation Bangabandhu Sheikh Mujibur Rahman and British Prime Minister Sir Edward Health.

The virtual desk to be manned by a dedicated officer of the Mission will work as a ‘one-stop IT portal’, facilitating UK IT companies, businesses and investors to find suitable technology and BPO partners in Bangladesh while IT companies from Bangladesh would be able to showcase their outsourcing solutions and services, start up and innovation ventures to the UK IT firms. Already nearly 100 firms have registered in our portal”.

Commenting on the business event, “[email protected]:Forging a Digital Economy Partnership”, the High Commissioner expressed hope that the event that brought together for the first time big names in Tech businesses, professional associations, Start-Ups, Venture Capital and Cyber Security of the two countries including British Computer Society, techUK, Confederation of British Industry and Federation of Small Businesses UK with BASIS, BACCO, LICT of Bangladesh Computer Council, as well as Startups such as Pathao along with Shopup, DigiCon, SBK from Bangladesh to UK companies outsourcing to Bangladesh such as Quantanite, Pathfinder, Computer Network Systems Limited, VEON, Global Digital Financial Service, SuperSeed Venture, Kingsway Capital and CyberWales, along with the Portal, would be a game changer in profiling Bangladesh as UK’s next outsourcing destination and building a sustainable digital economy partnership championing private sector and B2B connectivity.”

President of Confederation of British Industry Lord Bilimoria said that stronger partnership in IT sector between UK and Bangladesh would help both the countries build economic prosperity in the post-Brexit and post-pandemic period.

The two B2B panels titled `Is Bangladesh UK’s Next Outsourcing Partner?’ and `Tech Start-ups Bangladesh-The Next Unicorn’ were participated, among others, by President of BACCO, Wahidur Rahman Sharif, CEO of Quantanite UK, Mikko Tamminen, CEO of Pathfinder and Chairman of Infinity Tech Ifty Islam, Founder, Chairman and CEO of SBK Tech Ventures, Ms Sonia Bashir Kabir, and representatives from British companies who are investing in Bangladesh such as VEON Global Digital Financial Services, Kingsway Capital along with successful Bangladeshi BPO providers and startups including Auleek, CutOutWiz, Pathao and SBK Tech Ventures.

More than 320 IT experts, business association leaders and IT entrepreneurs from Bangladesh, UK and India joined the event.