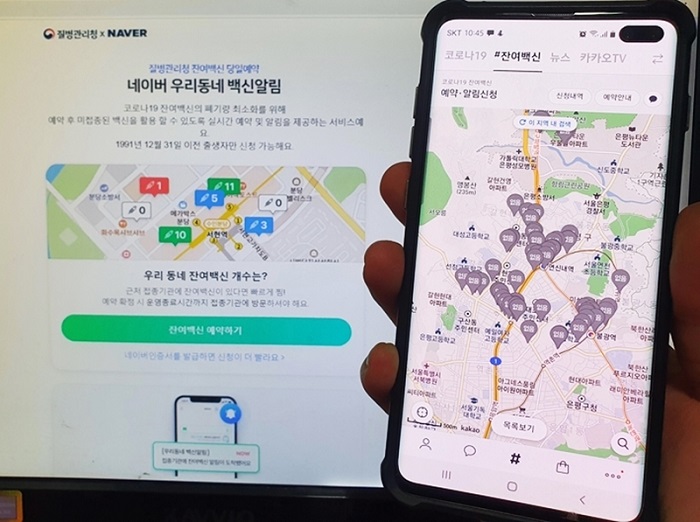 Korea runs a service through telephone and mobile apps to search for and set appointments to get leftover vaccines due to no-shows and the use of low dead space syringes. (Lee Kyoung Mi)

National vaccinations against COVID-19 in Korea have been stepped up, with the government's pledge to efficiently accelerate the process raising the prospect of reaching the goal of herd immunity by November.

The international statistical site Our World in Data said that as of on June 2, Korea's vaccination rate of 12.4% exceeded the global average of 11.1%.

Thus vaccinations in Korea are back on track thanks to a stabilized supply stemming from the government's efforts to secure vaccines, improved public awareness and incentives for people to get their shots.

A survey of perceptions of COVID-19 jointly conducted by the Ministry of Health and Welfare and the Ministry of Culture, Sports and Tourism on May 31 found that 70% of Koreans intended to get inoculated, up 7.8 percentage points from last month.

The government is also offering select exemptions from COVID-19 restrictions for those getting vaccinated. Since May 1, people receiving their first shots have been exempt from the family gathering restriction limiting the number of guests and can visit nursing hospitals and facilities to see patients in person.

Other perks include a discount on or free admission to national parks and recreational forests, palaces and concert halls. And from next month, those immunized need not wear masks outdoors at parks and hiking trails.

Reservations for residual vaccines that began on May 27 has also raised the national vaccination rate. This program allows people who want to get inoculated to do so using leftover vaccines caused by no-shows or the use of low dead space (LDS) syringes.

Non-priority groups of people aged 30 or older can get immunized first through this program. After checking real-time information on leftover vaccines through online platforms such as Naver and Kakao, simple appointments can be made after a self-certification process.

As of midnight on June 2, 278,282 people received their shots through this manner.

Major Japanese media including NHK, TV Asahi and the Nikkei gave heavy coverage to this service, which is unavailable elsewhere in the world. "This Korean-style response rapidly utilizes information technology to solve social problems," the Nikkei said.

Vaccine supply and demand is stable as well. The U.S. administration on June 3 said a million doses of COVID-19 vaccines would leave for Korea that evening.

White House Coronavirus Response Coordinator Jeffrey Zients told a briefing, "After making a 2,000-mile journey to California, these one million doses are being loaded into a plane that will take off to the Republic of Korea this evening."

Son Young-rae, a senior epidemiological strategist at the Central Disaster Management Headquarters and concurrently spokesperson of the Ministry of Health and Welfare, told a regular briefing on June 3, "We anticipate reaching our goal of vaccinating 13 million people plus alpha in the first half of the year."