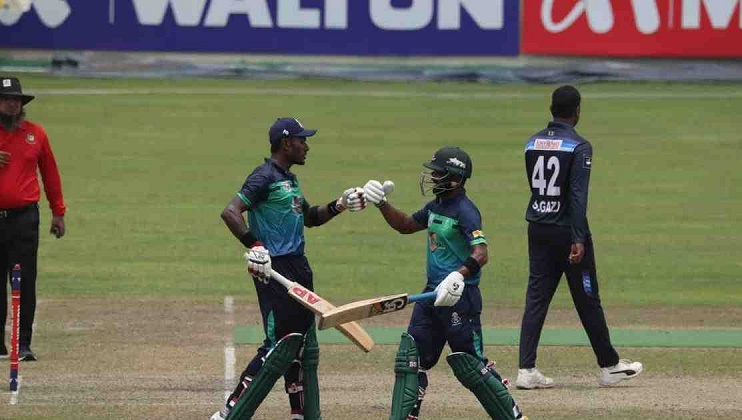 Khelaghar beat Legends of Rupganj by seven wickets in the day’s first game while Shinepukur handed Sheikh Jamal Dhanmondi Club a second straight defeat by 10 runs in the second match of the day.

Meanwhile, Prime Doleshwar Sporting Club jumped to the top position in the points table after dismantling Gazi Group Cricketers by 36 runs in the third and final match of the day.

Al-Amin struck 51 off 42 balls but none of the other batsmen could make big contributions as Rupganj only posted 138-5 in their stipulated overs after being asked to bat first.

Khelaghar lost both the openers early in the chase but skipper Jahurul Islam and Mehidy Hasan brought them back with a 97-run stand for the third wicket before the latter was dismissed on 54 off 45 balls.

However, Jahurul finished the game for his team by making unbeaten 53 off 44 balls with three fours and as many sixes that took his side to 140-3 in 19.3 overs and ended their losing run in the tournament.

Robiul Islam and Tanzid Hasan made 34 runs each while Towhid Hridoy scored 28 runs as Shinepukur scored 137-5 after opting to bat first against Sheikh Jamal.

Although Sheikh Jamal openers - Shykat Ali and Mohammad Ashraful failed to give their side a good start as in the previous matches, Shinepukur left-arm spinner Tanvir Islam continued his impressive performance in the tournament as he finished 4-2-8-3 in his full spell to frustrate the opponent batters.

Elias Sunny and Nasir Hossain made 30 and 28 runs respectively but it was not sufficient enough in the chase as they were bowled out for 127 runs in 19.5 overs to give their opponents the taste of the first victory in the ongoing meet.

Prime Doleshwar could make only 144-6 in their stipulated overs despite Fazle Mahmud and Saif Hassan contributing 39 and 37 runs respectively. Mahmudullah, Mukidul Islam and Nasum Ahmed all took two wickets each for Gazi Group.

Gazi Group could hardly challenge the mediocre total despite having a bunch of seasoned campaigners in their side and they lost wickets at regular intervals to be reduced at 66-8 in the 15th over.

Prime Doleshwar’s Shamim Hossain named man of the match for his all-round performance in the game, scoring 25 off 18 balls while claiming 2-17 in four overs.