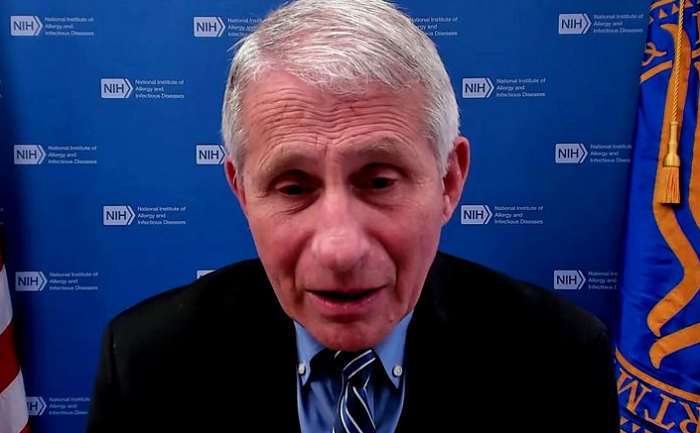 Dr Fauci has been the face of the nation's Covid-19 response, drawing both praise and criticism.

And press secretary Jen Psaki said Dr Fauci had been an "undeniable asset".

But emails have raised questions on whether he backed Chinese denials of the theory that Covid-19 leaked from a lab in Wuhan.

A trove of Dr Fauci's emails covering the onset of the coronavirus outbreak were released this week to media under a freedom of information request.

Why are people talking about Dr Fauci's emails?
In one email sent last April, an executive at a health charity thanked Dr Fauci for publicly stating that scientific evidence does not support the lab-leak theory.

In an interview with CNN, Dr Fauci said the email had been taken out of context by critics and he had an "open mind" about the origin of the virus.

In his defence, Ms Psaki said at her daily press briefing on Thursday: "The president and the administration feel that Dr Fauci has played an incredible role in getting the pandemic under control, being a voice to the public throughout the course of this pandemic."

There is no proof Covid-19 came from a lab, but US President Joe Biden has ordered a review into the matter that angered China, which has rejected the theory.

But recent US media reports have suggested growing evidence the virus could instead have emerged from a lab in Wuhan, perhaps through an accidental leak.

What did Fauci tell CNN?
On Thursday, Dr Fauci maintained there was nothing untoward in an email exchange between himself and an executive from a medical non-profit organisation that helped fund research at a diseases institute in Wuhan, the Chinese city where Covid-19 was first reported.

The NIH, which is a US public health agency, gave $600,000 (£425,000) to the Wuhan Institute of Virology from 2014-19 via a grant to the New York-based non-profit group EcoHealth Alliance, for the purpose of researching bat coronaviruses.

Peter Daszak, head of EcoHealth Alliance, emailed Dr Fauci in April 2020, praising him as "brave" for seeking to debunk the lab leak theory.

"Many thanks for your kind note," Dr Fauci replied.
Dr Fauci told CNN on Thursday it was "nonsense" to infer from the email any cosy relationship between himself and the figures behind the Wuhan lab research.

"You can misconstrue it however you want," he said, "that email was from a person to me saying 'thank you' for whatever it is he thought I said, and I said that I think the most likely origin is a jumping of species. I still do think it is, at the same time as I'm keeping an open mind that it might be a lab leak."

He added: "The idea I think is quite farfetched that the Chinese deliberately engineered something so that they could kill themselves as well as other people. I think that's a bit far out."

The face of America's fight against Covid-19
Allies of the US National Institutes of Health (NIH) infectious disease specialist say Dr Fauci's messages show nothing more than a dedicated public servant navigating the early days of a once-in-a-century pandemic.

But conservative critics are suggesting Dr Fauci may have engaged in a cover-up, and even claim he perjured himself in testimony to Congress.

How has the lab leak theory gathered pace?
According to an investigation in Vanity Fair magazine published on Thursday, Department of State officials discussed the origins of coronavirus at a meeting on 9 December 2020.

They were told not to explore claims about gain-of-function experiments at the Wuhan lab to avoid attracting unwelcome attention to US government funding of such research, reports Vanity Fair.

Gain-of-function studies involve altering pathogens to make them more transmissible in order to learn more about how they might mutate.

The Wall Street Journal reported last month that three employees at the Wuhan Institute of Virology fell ill and were admitted to hospital in November 2019, just before the first reported Covid-19 cases.

Days later, President Biden instructed US spy agencies to conduct a 90-day review into whether the virus could have emerged from a Chinese lab.

His administration had previously deferred to the World Health Organization for answers on how the pandemic began.

"I would like to see the medical records of the three people who are reported to have got sick in 2019," Dr Fauci told the Financial Times on Thursday. "Did they really get sick, and if so, what did they get sick with?"

He called on China to also release the medical records of six miners who fell ill after entering a bat cave in 2012 in China's Yunnan province.

Three miners died, and Chinese researchers later visited the cave to take samples from the bats.

"It is entirely conceivable that the origins of Sars-Cov-2 was in that cave and either started spreading naturally or went through the lab," he said.

Dr Robert Redfield, who led the Centers for Disease Control and Prevention during the Trump administration, told Vanity Fair that he received death threats from fellow scientists when he backed the Wuhan lab leak theory last spring.

"I was threatened and ostracised because I proposed another hypothesis," Dr Redfield said. "I expected it from politicians. I didn't expect it from science."

What has Fauci previously said about the lab leak?
During congressional testimony on 12 May, Dr Fauci emphatically denied the US had ever funded controversial gain of function research at the Wuhan lab.

During a subsequent Senate hearing on 26 May, Senator John Kennedy, a Louisiana Republican, asked how Dr Fauci could be sure that Wuhan scientists did not use the money for gain-of-function research.

"You never know," Dr Fauci conceded, while adding that he believed the Chinese researchers were "trustworthy".

What's the other political reaction?
Former President Donald Trump - widely vilified last year when he raised the possibility that Covid-19 came from the Wuhan lab - said on Thursday that Dr Fauci had a lot of questions to answer.

"What did Dr Fauci know about 'gain of function' research, and when did he know it?" Mr Trump wrote in a statement.

He added: "China should pay Ten Trillion Dollars to America, and the World, for the death and destruction they have caused!"

The same day, House of Representatives deputy Republican leader Steve Scalise demanded in a letter that Dr Fauci testify before Congress on the "US government's role in funding research that may have contributed to the development of the novel coronavirus".

Covid-19 is known to have infected some 172 million people, killing more than 3.5 million.