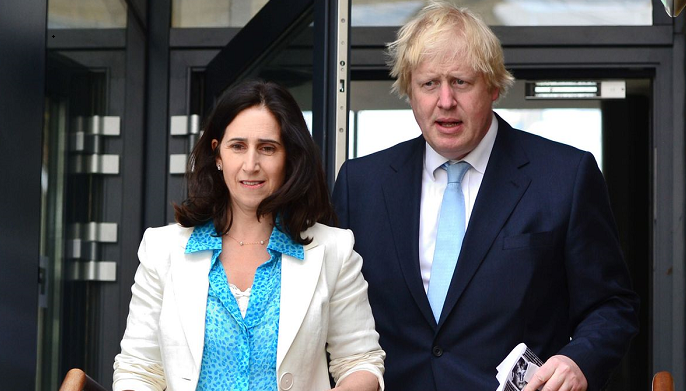 Boris Johnson's ex-wife said that life with the PM had become "impossible" as she revealed that she called time on their 25-year marriage.

Marina Wheeler offered a rare insight into the breakdown of her marriage to Mr Johnson, which occurred as she battled with cervical cancer.

The couple, who have four children, announced their separation in 2018 and their divorce was finalised in 2020.

"The divine plan, it seemed, had gone awry," she told the Mail.

"My four children and I already had tough stuff to handle.

"My 25-year marriage had become impossible, so I ended it, but the whole business was grinding, so why was I being doled out more?
"Of course, that's not how cancer worked. Two years on, I can see I was lucky."

Her comments came days after the twice-divorced PM tied the knot with Carrie Symonds in a top-secret ceremony.

The couple were wed at Westminster Cathedral on Saturday before hosting a reception in the Downing Street garden.

Pictures released by No10 show the new Mrs Johnson donned a floral crown and kicked off her shoes for the party in the garden.

The Prime Minister has long been known for his colourful love life, which is believed to include a four-year affair with American businesswoman Jennifer Arcuri.

Ms Arcuri sensationally told the Mirror that she was romantically involved with the-then Mayor of London between 2012 and 2016, claiming she had slept with Mr Johnson at his marital home.

The PM, who has never denied the affair, maintains a policy of silence around his personal life.

In March, his then press secretary Allegra Stratton failed to address Ms Arcuri’s explosive account of her relationship with Mr Johnson.

Questioned about the PM’s conduct, Ms Stratton said: “I’ve said he does believe in the wider principles of integrity and honesty. He acts with integrity and is honest.”

The pair got engaged the same year and she gave birth to their son Wilfred in 2020.

He married his Oxford University girlfriend Allegra Mostyn-Owen in 1987 but they split in 1993, and he married Ms Wheeler 12 days later.

Mr Johnson has never confirmed how many children he has but he is known to have at least six, including two sons and two daughters with Ms Wheeler.