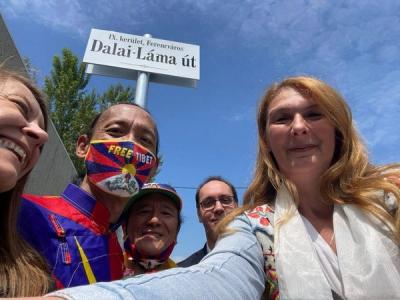 The Budapest authorities have decided to rename the streets in the Hungarian capital near a planned campus of a Chinese university to commemorate human rights abuses by China.

One street will be named after the Dalai Lama and two others will be called "Uyghur Martyrs' Road" and "Free Hong Kong Road" respectively, Euractiv reported.

This comes at a time the Hungarian government and the local administration of Budapest are engaged in a row over the former's plan to build a new campus of Shanghai-based Fudan University in the city.

"We have given the public spaces around the planned Chinese university a nice new name," Krisztina Baranyi, head of the capital's Ferencvaros district, wrote on her Facebook page, adding that the capital's citizens will be able to express their opinion about the plans in a poll starting from 4 June.

The development is expected to draw Chinese ire. Beijing usually reacts sharply to the criticism of its policies in Tibet, Hong Kong, and Xinjiang.

Hungary's political opposition has pledged to block the construction of the first Chinese university in the European Union (EU) due to the project's financial and security risks.

Fudan University is a Shanghai-based institution, which ranks among the world's top 200 universities. It is expected to be launched in Hungary by 2024.

Under the plan, up to 8,000 students will live and learn in a sprawling facility on the banks of the Danube.

Hungary will foot the full 1.5 billion euros ($1.8bn) bill to build the campus, powered by a huge loan from Beijing.

The project, the government, says will raise the standard of education and provide students with globally competitive knowledge, Al Jazeera reported.

However, the country's opposition is not convinced. Mayor of Budapest Gergely Karacsony, who hopes to run as the opposition candidate for prime minister in elections next year, promised to use "all possible legal and political means" to halt the plan of the right-wing government to build a campus for Fudan University in the capital.

China has sought to use its huge fiscal firepower to try to win influence in Central and Eastern Europe as part of a bid to boost its interests inside the EU and the North Atlantic Treaty Organisation (NATO).