Edward Colston statue to go on display in Bristol exhibition 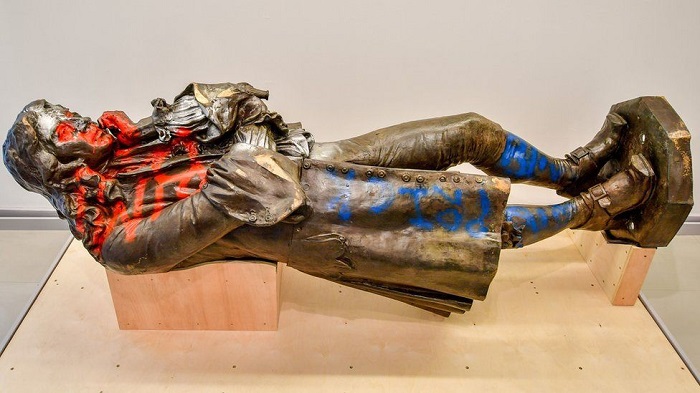 A statue of slave trader Edward Colston that was toppled during a Black Lives Matter protest is set to go on display.

The bronze memorial to the 17th Century slave merchant was thrown into Bristol Harbour on 7 June 2020 in the wake of George Floyd's murder in Minneapolis.

On Friday, the bronze statue will go on display at the M Shed museum alongside placards from the protest.

Residents have been invited to take part in a survey to decide what should happen to it after the exhibit.
The We Are Bristol History Commission will lead the public consultation while the statue is at the museum, which will decide what its long-term future will be.

Dr Shawn Sobers, associate professor at the University of the West of England and part of the commission, said the effects of the statue being pulled down "ricocheted" across the UK and the world.

"We know this isn't an isolated incident, we know that there are statues across the world that celebrate slavers," he said.

"At the same time, the anti-racist movement isn't about statues. It's trying to eradicate racism from society and bring equality where there's racial disparity which cuts across economic divides.

"But statues are a symbol of how seriously our cities in Britain are actually taking these issues."
Dr Sobers described putting the Colston statue on display as an opportunity to tell a "wider history" and encourage people to speak about it.

"We're using this opportunity to find out what local people think because we have to live in this city together," he added.

Bristol mayor Marvin Rees said: "The future of the statue must be decided by the people of Bristol and so I urge everyone to take the opportunity to share their views."

Prof Tim Cole, chair of the commission, said: "The display is not a comprehensive exhibition about Colston or transatlantic slavery in Bristol, but it is intended to be a departure point for continuing conversations about our shared history."