US pledges support for whoever leads Israel 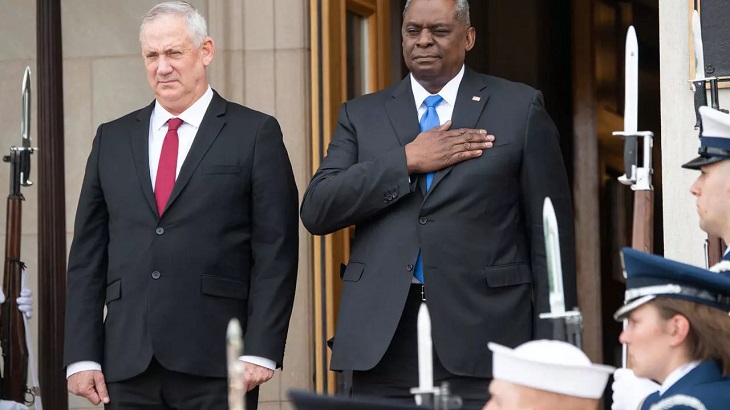 Israeli Defense Minister Benny Gantz received a pledge of US support for whoever is Israel's next leader Thursday as he met with top officials in Washington while Prime Minister Benjamin Netanyahu was facing ouster back home.

US security and defense officials also told Gantz they would help replenish its "Iron Dome" missile defense system after it was used heavily in the recent conflict with Gaza, but also pressed Israel to reduce tensions with Palestinians.

"We're not going to speak to government formation while it's in process," State Department spokesman Ned Price said after Gantz met with Secretary of State Antony Blinken.

At the Pentagon, US Defense Secretary Lloyd Austin reiterated that Washington supports Israel's right to defend itself, but that security also involved rebuilding confidence with Palestinians.

"The President has expressed his full support for replenishing Israel's Iron Dome missile defense system, which saved so many innocent lives during the most recent conflict," Austin told Gantz.

"As my colleague Secretary Blinken made clear in Israel last week, a lot of work needs to be done to rebuild confidence and trust, and to create conditions to reengage in a meaningful way on the path to a two-state solution."

Gantz was in Washington just after a coalition of diverse opposition parties, to which he belongs, struck a deal Wednesday to remove Prime Minister Netanyahu from office after 12 years in power.

Questions though remained over whether the coalition can hold together long enough to unseat Netanyahu.

The political turmoil comes after the US was pulled into discussions over the recent deadly conflict between Palestinians and the Jewish state that left 254 dead from Israeli rocket strikes in Gaza and 13 dead in Israel.

Gantz did not meet with US President Joe Biden, who has an ambivalent relationship with Netanyahu.

Instead he met White House National Security Advisor Jake Sullivan, who "highlighted the importance of ensuring that immediate humanitarian aid is able to reach the people of Gaza," according to an official statement from the meeting.

The two also discussed the threat Iran poses to the region, as the US seeks to restore the 2015 JCPOA agreement that prevented Tehran from pushing forward to develop nuclear weapons.

"I am well aware of the important dialogue about future agreement, which will stop its nuclear armament," he said.

"Our dialogue is so important to ensuring that any deal effectively meet its goal of keeping Iran away from nuclear weapons."