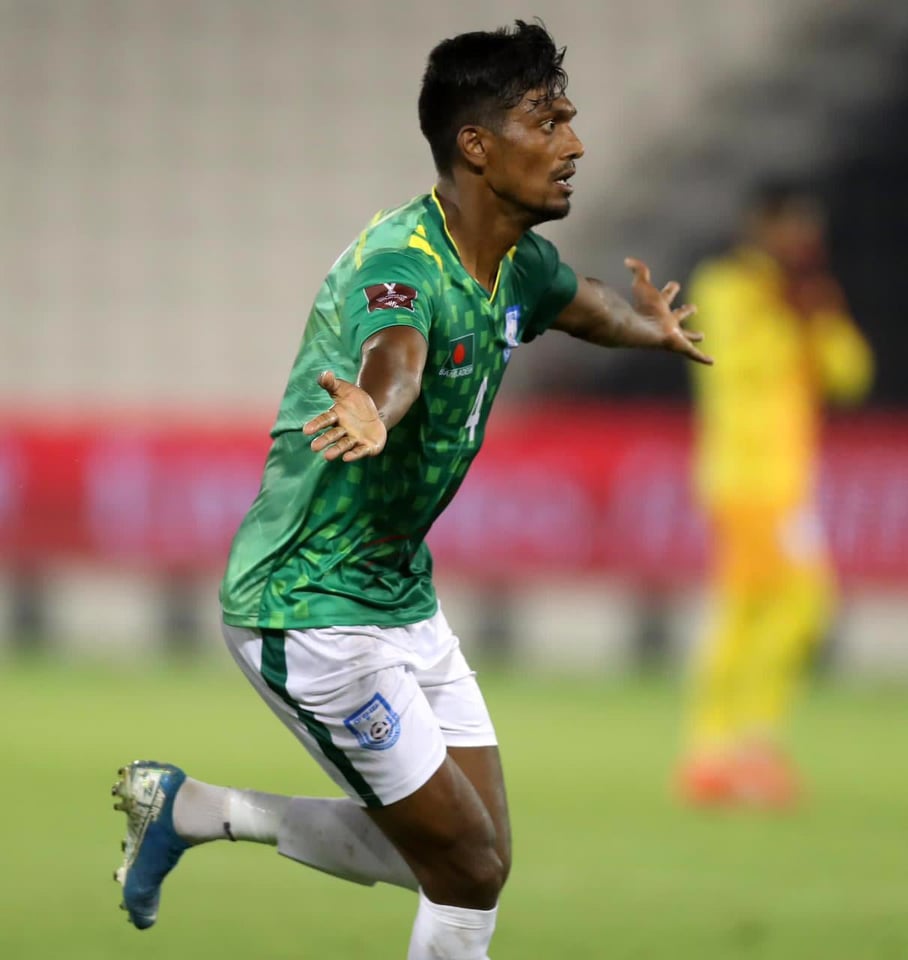 Bangladesh surprised higher-ranked Afghanistan as they played a 1-1 draw in their second-leg match of the joint qualifiers round two for FIFA World Cup 2022 and AFC Asian Cup 2023 at Jassim Bin Hamad Stadium in Doha, Qatar on Thursday.

Defender Topu Barman scored a fabulous late goal in the 84th minute that confirmed Bangladesh’s only second point in the ongoing qualifiers after Afghan forward Amiruddin Mohammad Anwar Sharifi gave his side the lead in the 48th minute.

Bangladesh will now face India in their penultimate match on June 7 before they take on Oman on June 15 in their last qualifier match, both at the same venue.

The 184th-ranked Bangladesh appeared on the field with an expectation of earning some point against the 149th-ranked Afghanistan in their sixth qualifier match.

The men in red and green earlier conceded a 0-1 goal defeat in their first-leg match against Afghanistan at Tajik capital Dushanbe in September 2019.

Bangladesh head coach Jamie Day started with a 4-4-2 formation and Finnish-born Bangladeshi defender Tariq Kazi made his national team debut in the match.

The 20-year old also became only the second foreign-born Bangladeshi footballer after the 31-year-old Danish-born Jamal Bhuyan to make his debut for Bangladesh.

Afghanistan tried to put pressure on Bangladesh defence with their attacking football from the beginning of the match but the men in red and green led by goalkeeper Anisur Rahman Zico and defenders Topu and Tariq shattered their efforts.

Bangladesh forwards also created one or two close chances from the counter-attacks but they also failed to convert it into a goal.

In the 16th minute, Masuk Miah Zoni ran with the ball straight inside the box when Jamal sent him a long cross. The midfielder passed the ball from the right flank but no one was there to assist him.

In the 39th minute, forward Matin Miah’s shot went off the target from near to the box. Apart from these close attempts, the men in red and green achieved some set pieces in the danger area but failed to convert any of those and the first half ended goalless.

Bangladesh, however, conceded a goal at the beginning of the second half after Afghan forward Amredin Sharifi sent the ball home with a left-footer off a cross by David Ahmed Najem from the right flank.

The men in red and green suddenly looked like a changed team and started to put pressure on Afghans to level the margin.

In the 79th minute, substitute Abdullah wasted a golden opportunity to level the margin after Manik sent him a ball inside the box with a long cross but Afghan goalkeeper Ovays Azizi denied him with a great save.

However, five minutes later, defender Topu brought relief in Bangladesh camp with a right-footer grounder from inside the box, assisted by another defender Rafi.

Afghanistan made several attempts in the final minutes of the game but Bangladeshi defenders successfully defended the attacks to frustrate the Afghans and earned a hard-fought point finally.