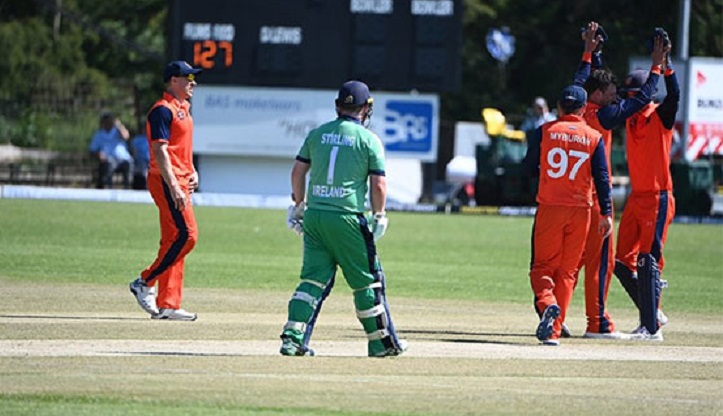 The Netherlands defeated Ireland by just one run on Wednesday in the first of three one-day internationals in Utrecht.

Timm van der Gugten starred with both bat and ball in a match that forms part of the World Cup Super League qualifying process for the 2023 50-over showpiece in India.

Test nation Ireland had the edge early on, with Craig Young and Josh Little taking three wickets apiece before tailender Van der Gugten's 49 from 53 balls saw the Netherlands to a total of 195.

Ireland then collapsed to 69-5 before the experienced Paul Stirling revived their innings with 69 only to fall to Van der Gugten, the man of the match.

Left-arm spinner Pieter Seelar then took two wickets in an over to leave Ireland needing 19 runs from 24 balls.

And with three required off the last ball, Ireland No 10 Little failed to connect, with the ensuing bye not enough to deny the Dutch a tense victory.

The second ODI is scheduled for Friday, with the series concluding on June 7.

For the World Cup, hosts India and the top seven sides thereafter in the 13-team Super League will qualify automatically.

The remaining five teams will then play in a 2022 qualifying event to decide the final two sides for a 10-nation World Cup.